I am seriously getting in the fall spirit. Halloween Costumes and Fall Sweaters just aren’t enough! Pumpkin Pie, Tangerine Cranberry Sauce, and these Chai Tea Chocolate Truffles are all go to’s for me during the fall and winter. And I’m ready to create some seasonal desserts. Pumpkin Pie just happens to be one of my absolute favorites pies anytime of year.

This Vegan Pumpkin Pie Recipe is super special to me because it’s one of my very first recipes, create, adapted and perfected when I was a teenager! I’ve been baking my whole life and went vegan when I was in high school (it was short lived but amazing while it lasted.) 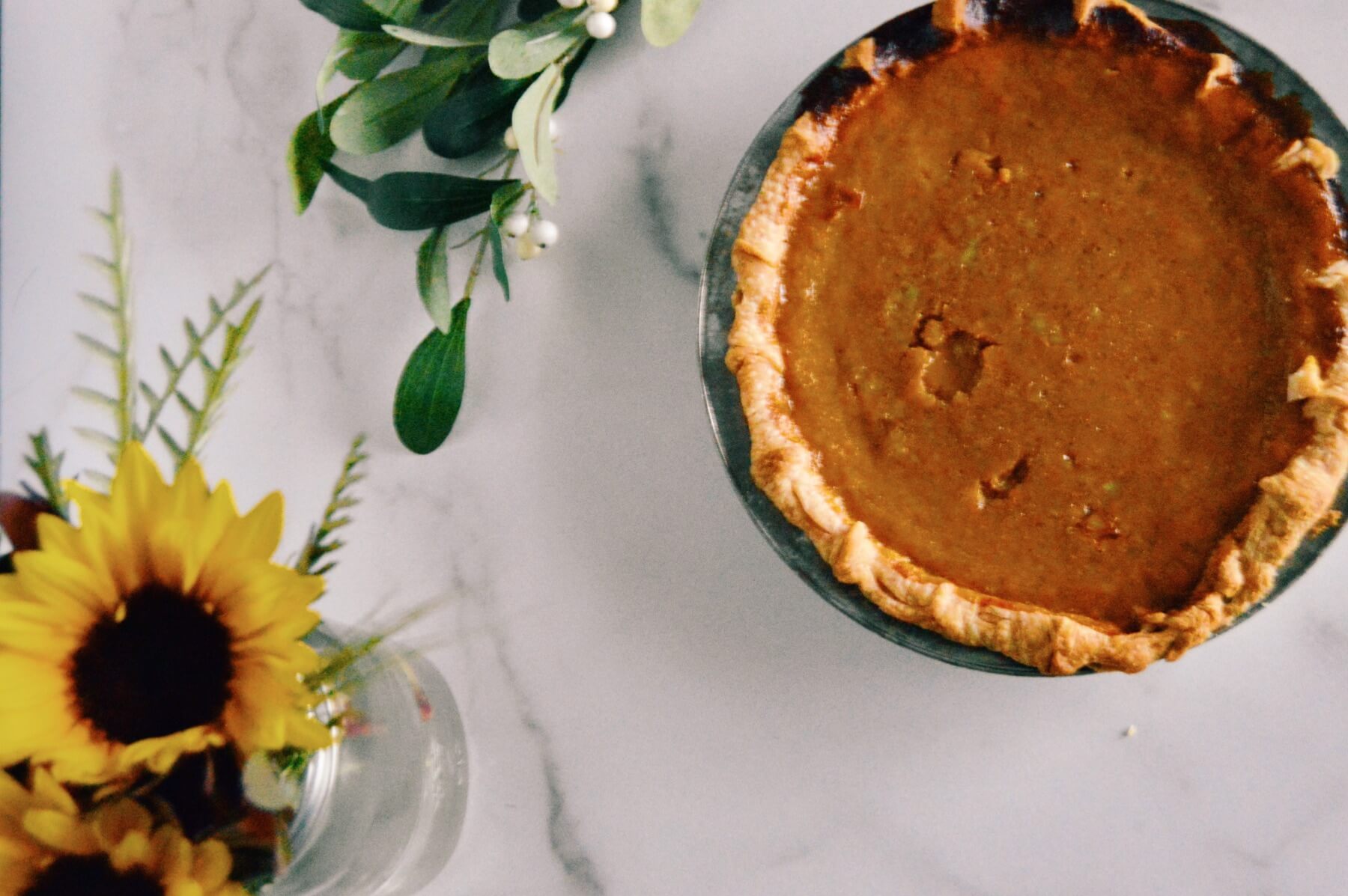 My favorite thing about this recipe is that it doesn’t include tofu. I don’t know what my problem is, I love tofu, but just not in desserts. The flavors don’t work for me. There was a moment in time where all Vegan Pumpkin Pie Recipes included tofu. Those were dark days.

If you want to go straight to the printable recipe card, scroll to the bottom, but if you are looking for tips and tricks to make the best Vegan Pumpkin Pie, then read on! 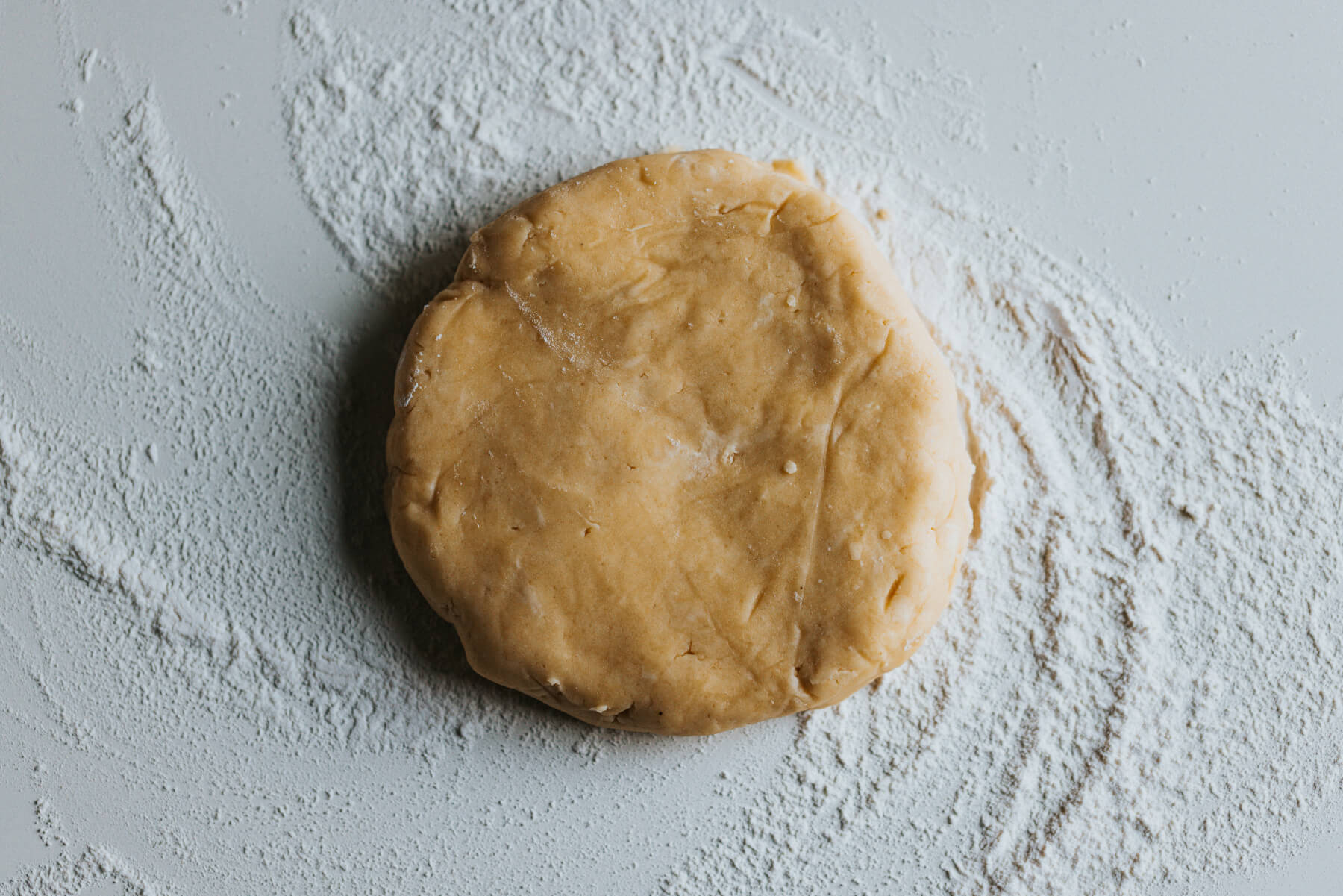 1. Chop your vegan butter into small pieces before you use it. Cold ingredients work best, and chopping butter into the short crust into small bits is an essential step of making the crust. Once you chop the vegan butter, return it to the fridge to re-chill until you are ready to use it.

2. Don’t overmix the short crust. For the perfect texture crust, you need to just mix the ingredients until blended. Overmixing can cause the crust to become too crumbly or tough.

3. You can pre-bake the pie crust. If you ever struggle with the bottom of your crust staying doughy or if you like a crispy crust, you can pre-bake the pie shell empty. To prevent it from rising, cover the pie crust with aluminum foil and set pie weights inside. Don’t have pie weights? I don’t either! I use a ceramic coffee mug set in the center. Then I bake my pie shell for around 10 minutes. Don’t bake it all the way, just bake it until the dough starts to look slightly dry. 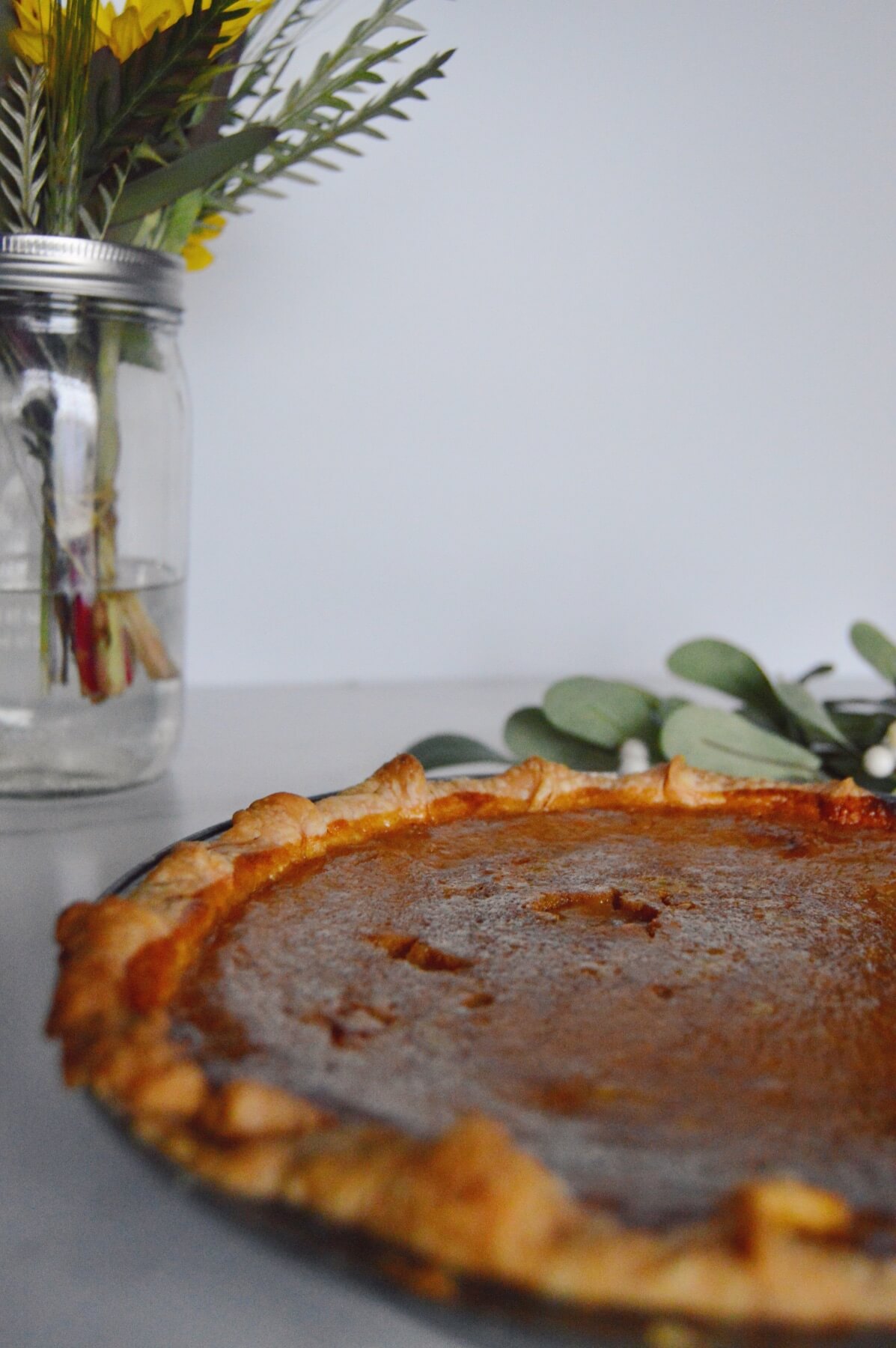 This Vegan Pumpkin Pie Recipe allows for a lot of substitutions. The first time I made this recipe, when I was a teenager Coconut Milk wasn’t a thing! The only non dairy available was soy milk. In this recipe, it’s totally fine to substitute the coconut milk for almond or soy. As far as the coconut cream, that gives the pie a bit of creamy richness. It doesn’t have a replacement, but it won’t alter the texture too much if you leave it out completely.

Additionally, I’ve always considered replacing the maple syrup with honey! Some people would say that honey is not vegan and that’s a tough call because bees are insects, not animals, and produce honey outside of their bodies in a way that does not harm them. If you want to experiment, you are welcome to try substituting the maple syrup for honey.

Just as long as you keep the basic ingredients in place, you can try getting creative with this recipe to adapt it to your own tastes! 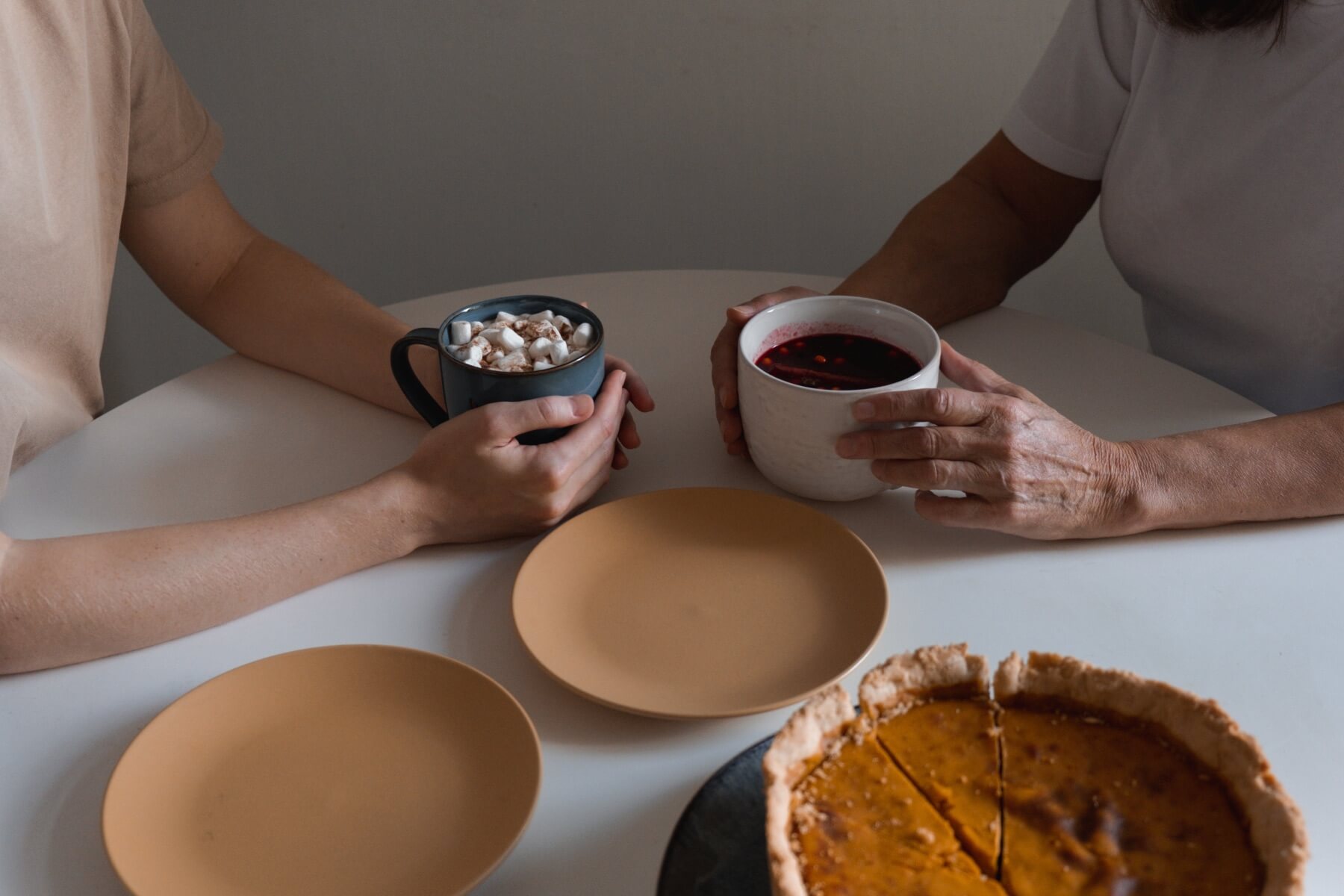 How to Make Pumpkin Pie Spice from Scratch

Pumpkin pie spice is so convenient. But if you use a pre-blended mix the flavors have often settled together so they aren’t quite as punchy and pronounced. Instead, I like to make my own pumpkin pie spice blend which is so easy!

All you need is: 1/2 tablespoon Cinnamon, 1/3 teaspoon Ginger, 1/3 teaspoon Nutmeg, 1/4 teaspoon Allspice, and 1/4 teaspoon Clove. Just blend the spices together thoroughly and evenly before adding them to your pumpkin pie filling. The flavors are fresh, spicy and delicious. 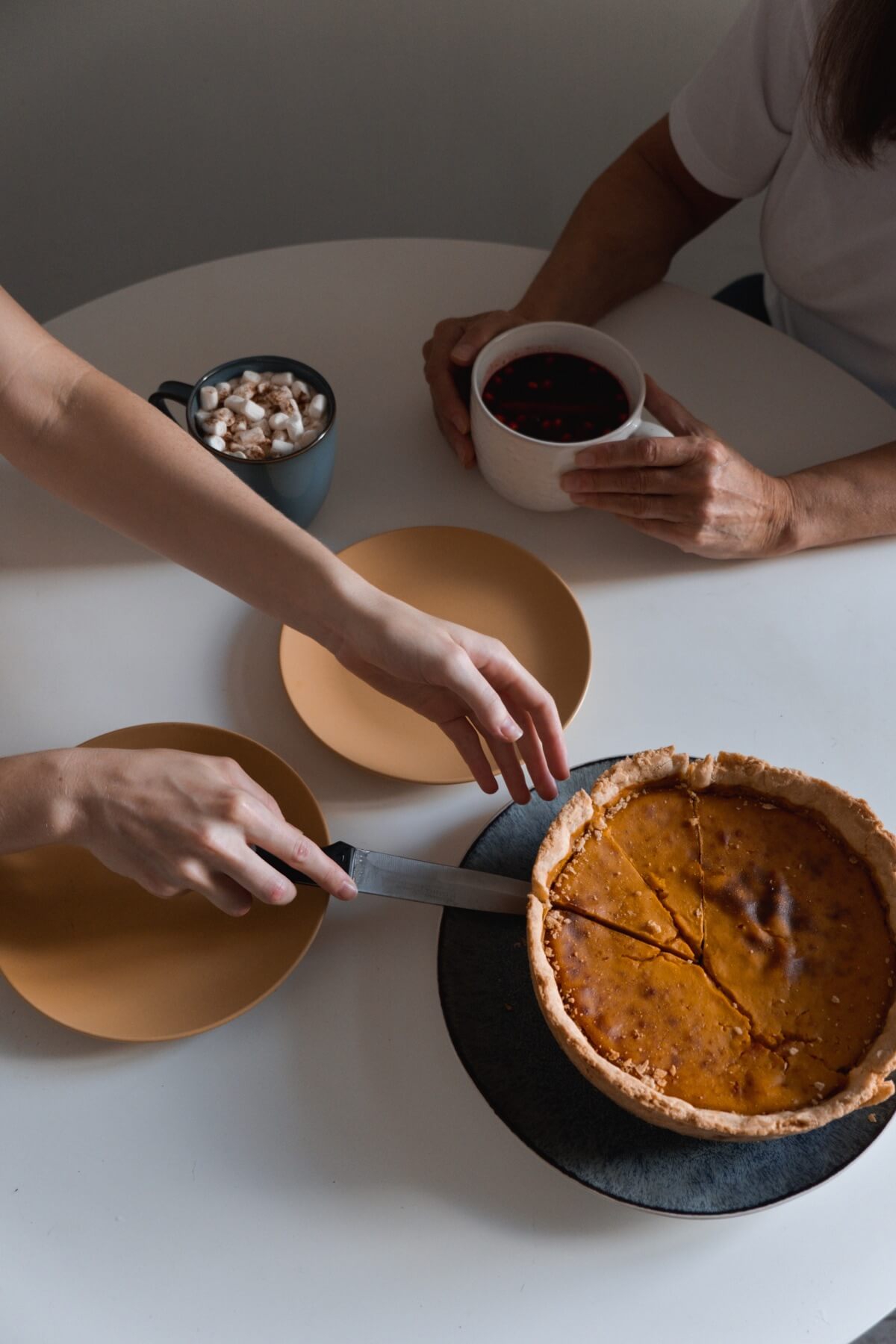 How to Bake a Vegan Pumpkin Pie

To make your pie filling, just blend the ingredients completely, thoroughly and evenly. It’s important to make sure the texture will be even and the spices are perfectly blended.

But baking a pumpkin pie does have a few tricks.

2. Knowing when your filling is finished is similar to a pecan pie. Any gooey creamy filling is hard to know when it’s done and ready chill. That’s because it doesn’t quite set when it’s in the oven and warm, that happens as the pie is cooling. To know when the Vegan Pumpkin Pie is ready, just give it a little jiggle. Not too hard. When you see the center of the pie jiggles evenly with the outer edges of the pie it’s ready. It’s not quite ready when there’s a lot more movement in the center than around the edges. 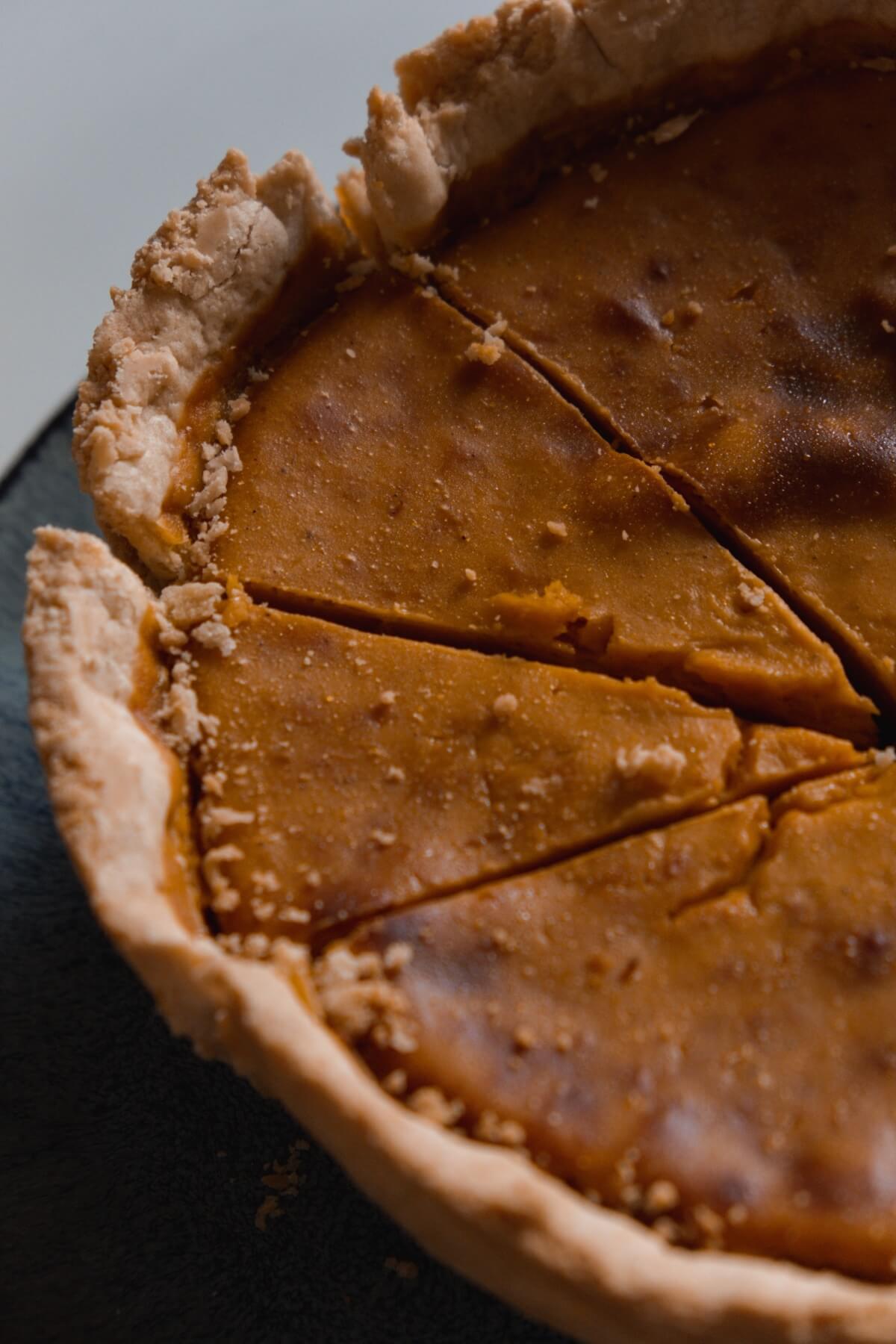 How to Serve a Vegan Pumpkin Pie

I can’t even fathom eating a pumpkin pie without whipped cream! It’s a must. The good news is there are so many different vegan whipped creams available. This one is my favorite.

You could also serve this pie with a vegan ice cream! Or a cup of coffee to give yourself all the pumpkin spice latte vibes.

This pie is a great alternative to a regular pumpkin pie and is perfect with a traditional holiday feast for the non-vegans with: turkey and cranberry, or glazed ham. And for vegans: butternut squash pasta, or any of these hearty soups. 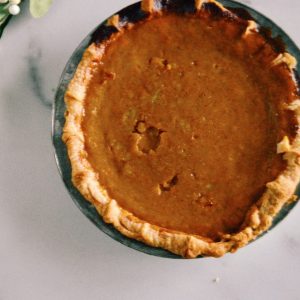 Brittany Bly
This Best Ever Vegan Pumpkin Pie is a delicious dessert that no one will know is vegan! The best part is that it's easy to make and there is no tofu needed.
Print Recipe Pin Recipe
Prep Time 20 mins
Cook Time 55 mins
Total Time 24 mins
Course Dessert
Cuisine Vegan
Servings 12 Servings

The best thing about this Best Ever Vegan Pumpkin Pie Recipe is that no one will know that it is vegan! This is the perfect dish for a group gathering or a holiday dinner. Bon Apetit!