You know it’s fall when you are craving a dessert like this! These Fried Apple Pie Wontons have a thin, crispy shell and are a fun twist on a traditional apple pie. Apples are so perfectly autumn and this dish is such a great spin on the classic treat!

So let’s make them! Keep reading for helpful tips and tricks or scroll straight to the bottom for the recipe card. Additionally You will Need:

A Deep Pot or Deep Fryer
A Basting Brush
A Fork Before you get started get your egg ready to use by whipping it to an even consistency. We’re not making the egg into an egg wash – like other pies. Instead, we’re going to use that egg to seal the edges of the wontons. You may also want to start heating your oil now too. These apple pie wontons should be deep fried. For most stoves and deep fryers that’s medium heat. Last, mix your brown sugar and cinnamon together.

To make the wontons, remove the wonton papers from the packaging and lay them flat on a cutting board or any clean, non-stick surface. Add a small amount of apple slices (in the form of pie filling and sauce) to each wonton wrapper. I used about 3 slices each. Place the apples on 1 triangle of the wonton paper, so you will be able to fold the other triangle over the top to enclose the filling. Sprinkle the apples with just a touch of your brown sugar and cinnamon mixture. The egg will act like glue, but it’s imperative that those edges stay together while the apple pie wontons are frying! So be sure to truly seal the edges of the wonton paper together. You can brush the outside of the wonton with egg if you like! Now hopefully you have started heating your oil. If not, be sure to do that now! Your oil should be fully heated to medium temperature before adding your wontons. When the oil it hot, gently drop the wontons in and deep fry until golden brown. That should be around 5 minutes or perhaps slightly longer. Pull the wontons out with a mesh strainer and place the wontons on a paper towel to absorb a bit of oil. While the wontons are still hot and glistening, sprinkle them with just a touch of brown sugar and cinnamon Allow them to cool for just a few minutes, before you serve them. You know the inside of those wontons will be like hot lava! You could serve these Fried Apple Pie Wontons with ice cream or even a healthier frozen yogurt. They also make the perfect party dish to take to a dinner party. They travel easily and keep well! 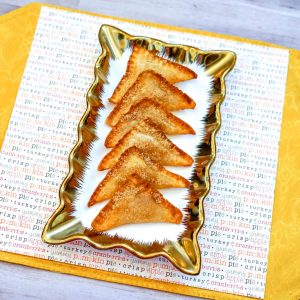