If you’re a Game of Thones fan (and let’s face it who isn’t), then you’ll definitely want to carve out some time in Girona if you’re planing on heading to Barcelona! 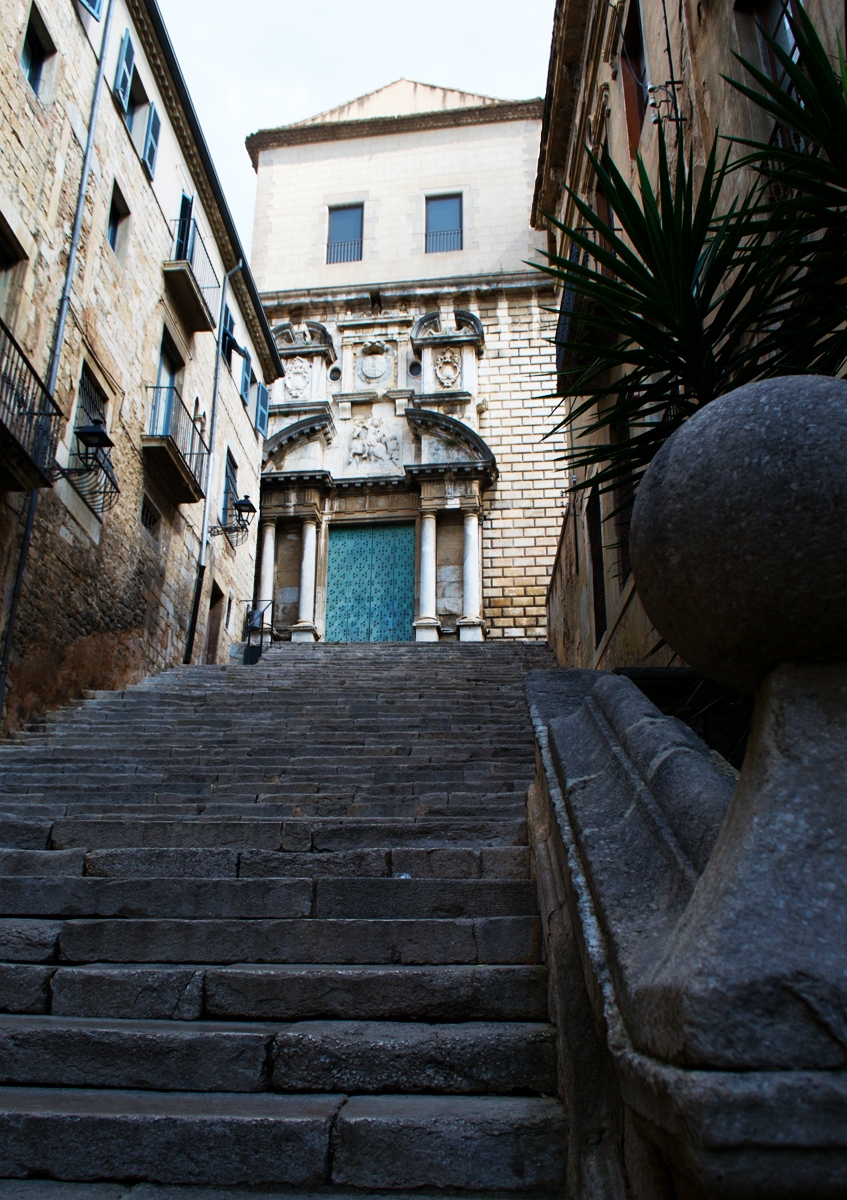 There are quite a few filming locations to be seen, among them the iconic Shame scene, and what you’ll recognize as the streets of Bravos. 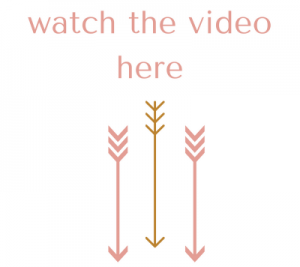 However, if Game of Thrones somehow isn’t your thing, Girona is still a must-visit in my opinion. At only 45 minutes away from Barcelona, it’s incredibly easy to get to. Once you’re there, you’ll find that the town is an explorer’s paradise! Get lost walking the many cobblestone streets of the Jewish quarter, tour any of the several cathedrals, or get a bird’s eye view of the city by walking along the old city walls.

I did all of these things and more in the short 24 hours that I spent in Girona with plenty of time to spare. I also ate some truly delicious pastries and had the tastiest patatas bravas of my entire trip.

I love using Google My Maps to create my own map when I go on a trip, and I highly recommend doing that yourself, but if you’re interested in everywhere that I went when I stayed in Girona, you can find my map here. 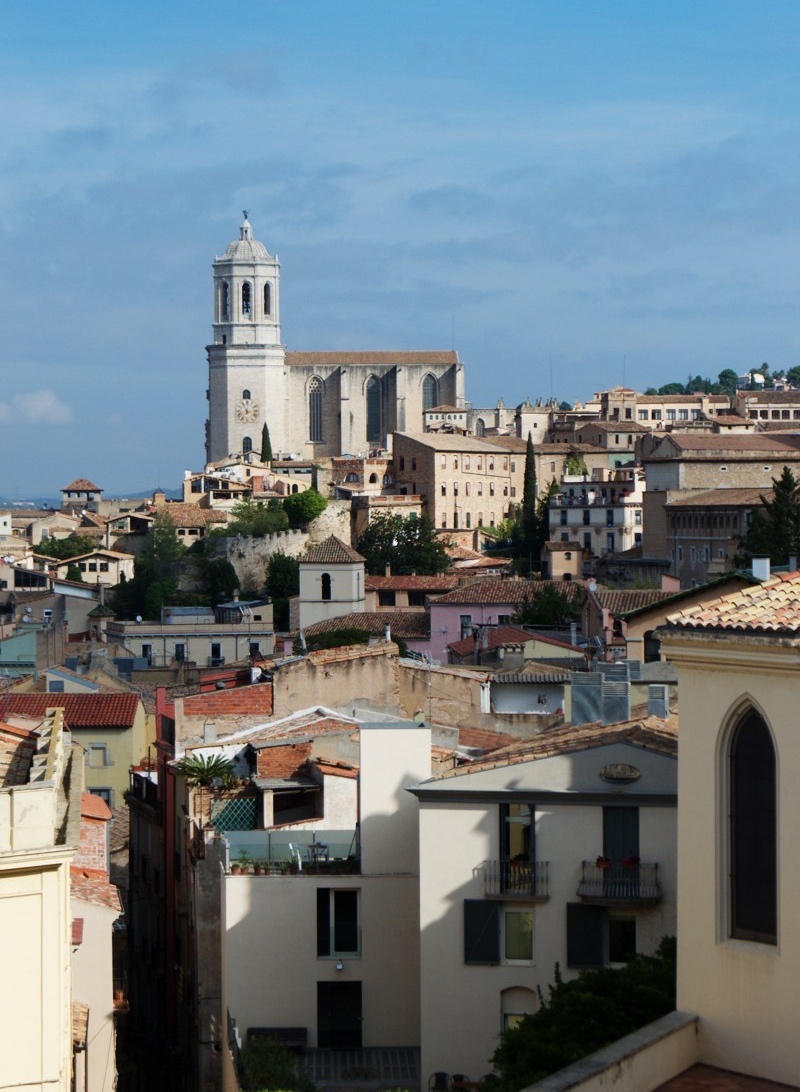 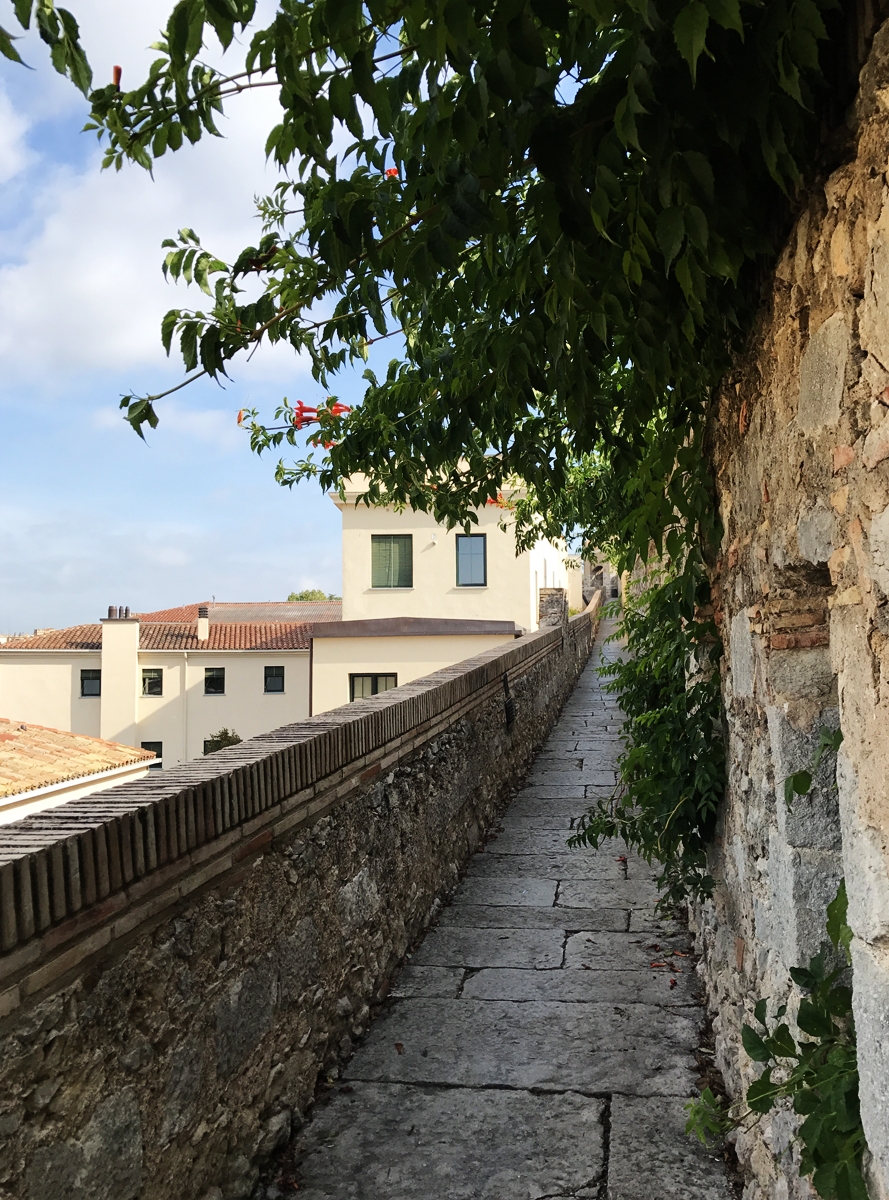 How to Get to Girona:

Assuming you’re coming from Barcelona, its quite easy to get to Girona. There is a high speed train that leaves from Barcelona Sants station and takes you to Girona in just 45 minutes. When you arrive in Girona, the Old Jewish quarter is only about a 20 minute walk from the station. I’m sure you could take a cab as well, but it’s a very pleasant walk! 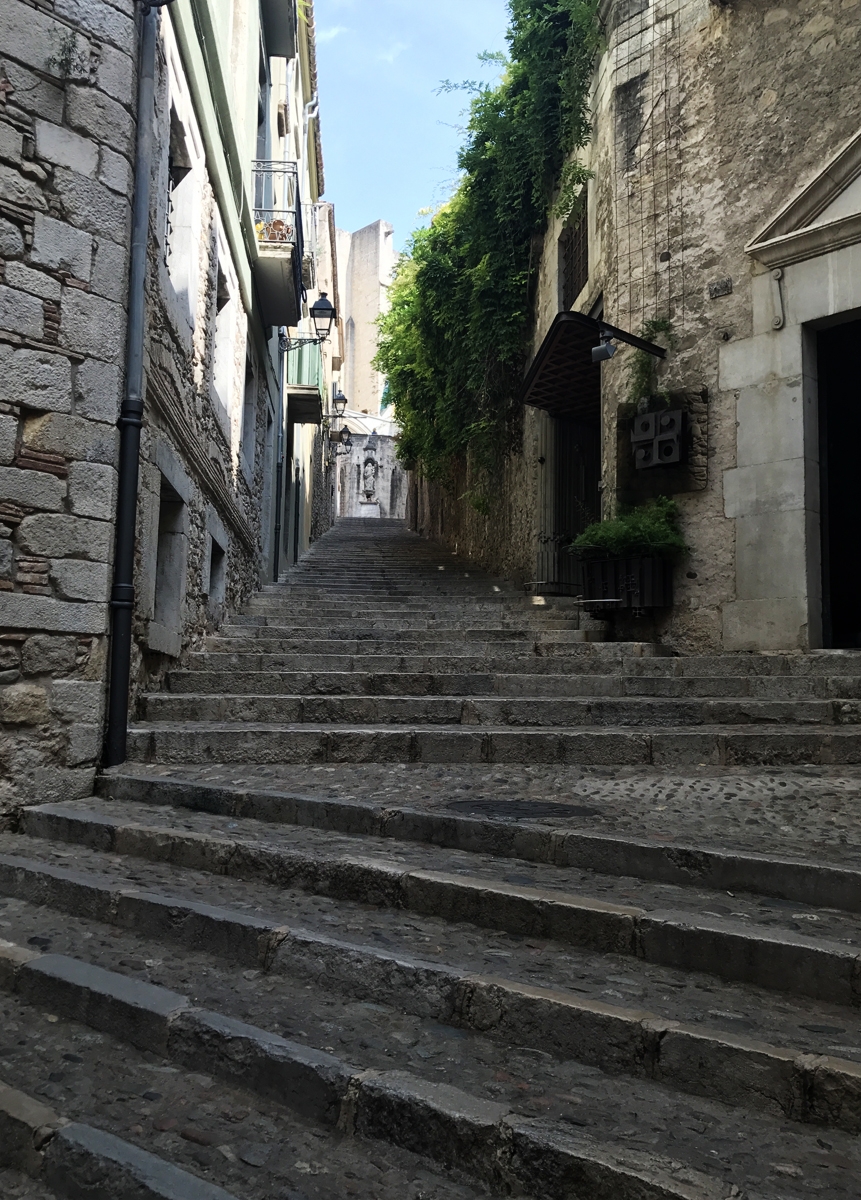 I stayed in a cute little Airbnb while in Girona. It was up near the Arab Baths, so basically on one end of the city, which made it kind of nice for getting around. I could just start working my way down weaving through the streets and didn’t have to worry that I was missing things in the opposite direction. The AirBnb was a private room with a kitchenette, laundry, bed, bathroom and living area. It also had a small balcony that overlooked the perfect cobblestone streets. My host was very nice, and although she didn’t speak English, we were able to use Google translate on our phones to understand each other. 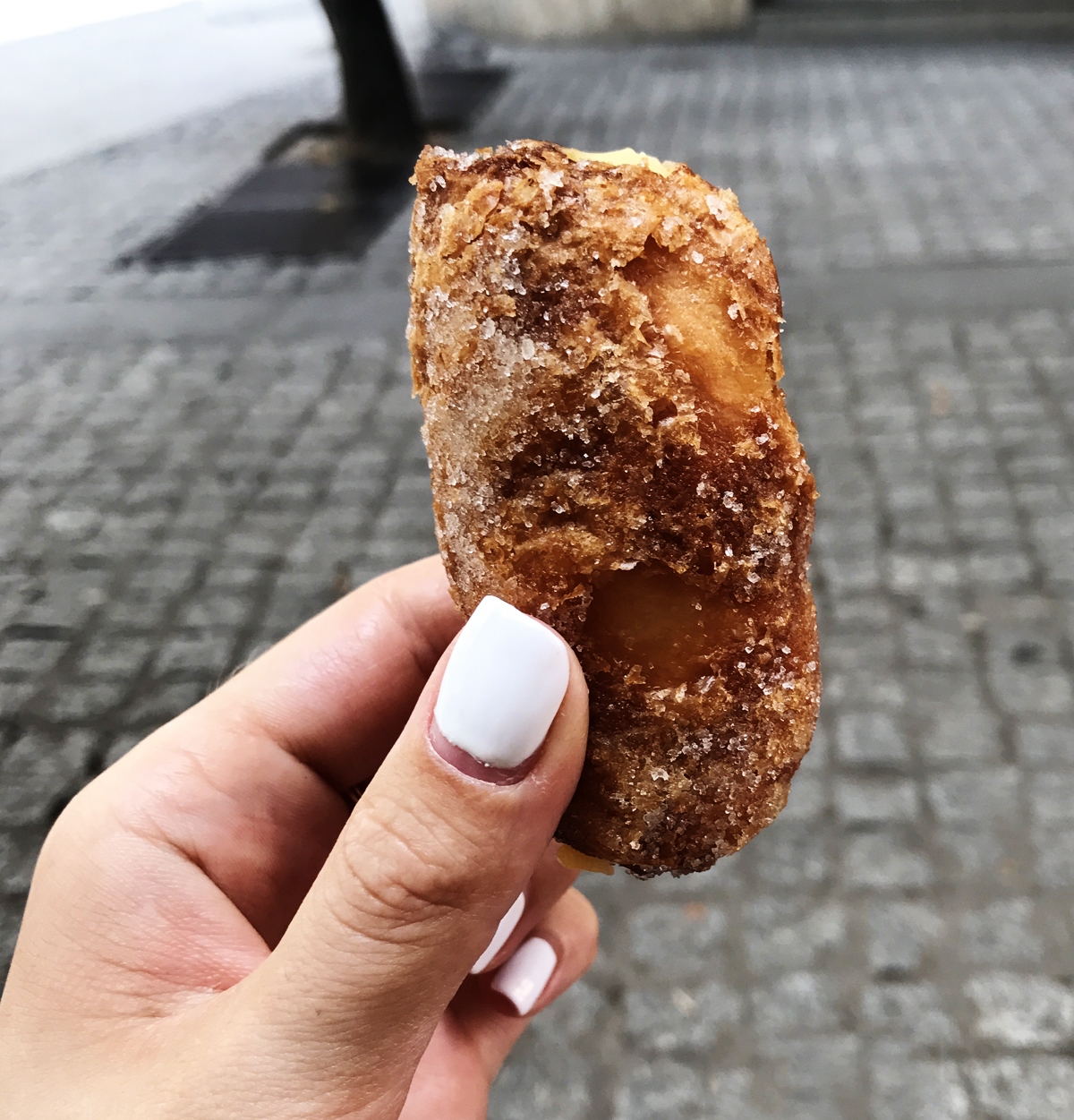 I have a number of food locations on the map that I made, but if there is anywhere that you absolutely MUST visit when you’re in Girona, it’s Casa Moner. The pastry that I had was akin to a cannoli, and every bit as delicious. It’s called a Xuixo and is an absolute MUST, ok?! OK.

I also had delicious coffee and avocado toast from a cafe called La Fabrica. Girona is very cyclist-friendly, so there were a ton of cyclists in this cafe that stopped for their morning coffee. It’s also owned by Canadian expats, so I think it’s kind of nice to support some fellow Canadians!

Lastly, I had some scrumptious patatas bravas from Konig Sandwiches, which was very close to my Airbnb. They had a huge patio, so it was nice to sit outside and eat my dinner at the typical Spanish time of about 10pm.

I had some buckwheat crepes from La Vedette that were just ok as well as the gelato from Rocambolesce, which was tasty, but given the owners own a Michelin starred restaurant elsewhere in Girona, I wasn’t super impressed. 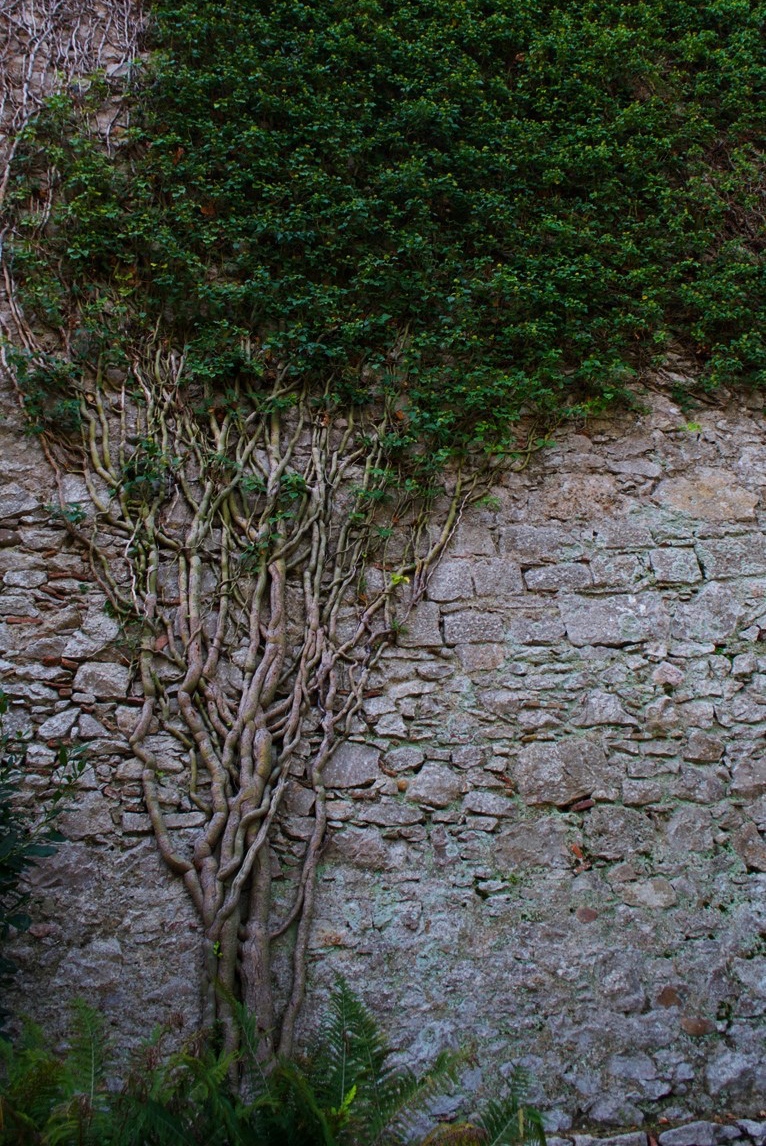 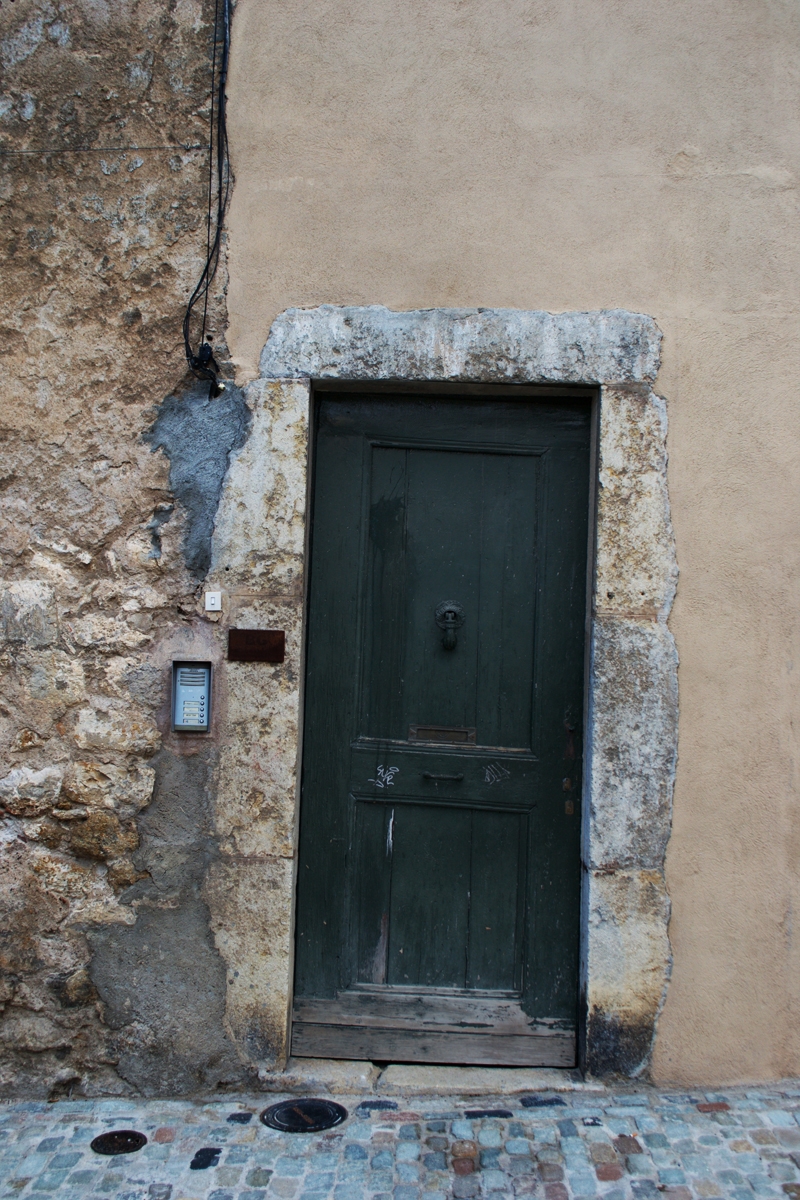 I will get to the Game of Thrones locations in a mere moment, but first, a few places to keep in mind. One of the things that I loved so much about Girona was the fact that you could walk along the old city walls and get a bird’s eye view of the city. They’re super easy to get to from any point in the old part of town, and were surprisingly uncrowded. You just can’t beat these views: 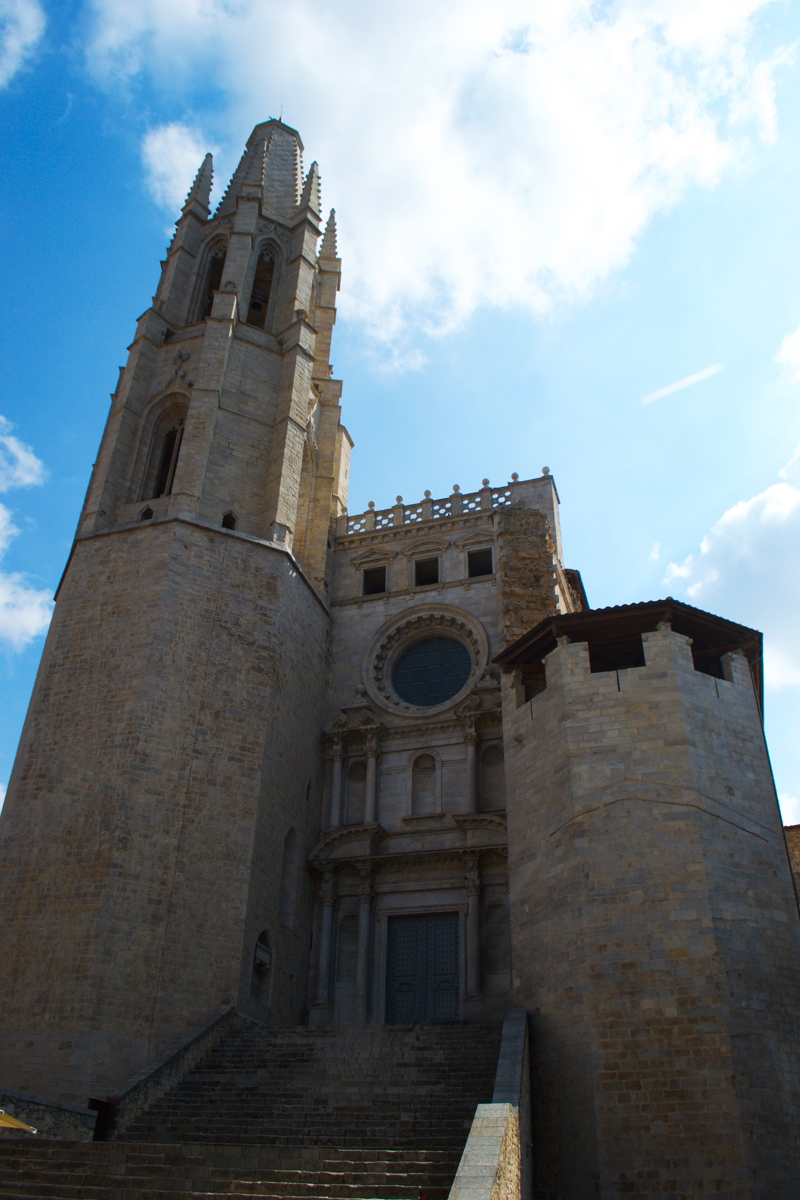 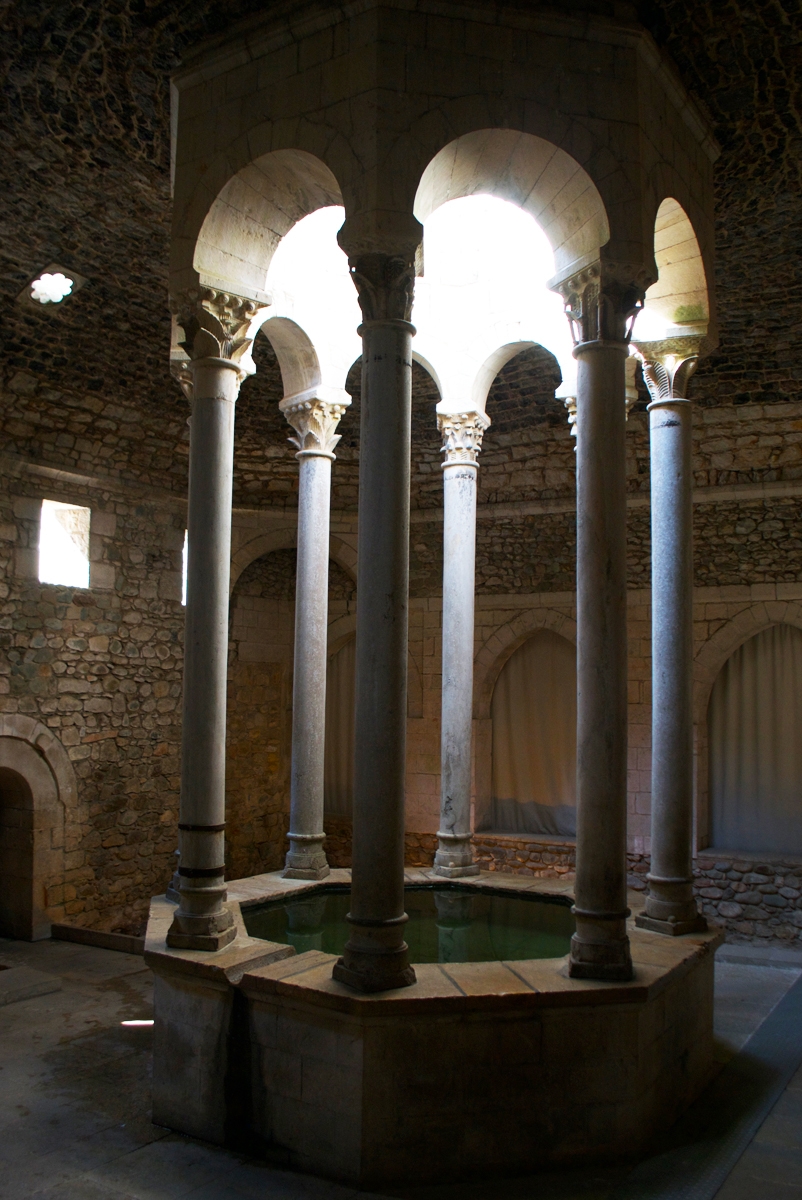 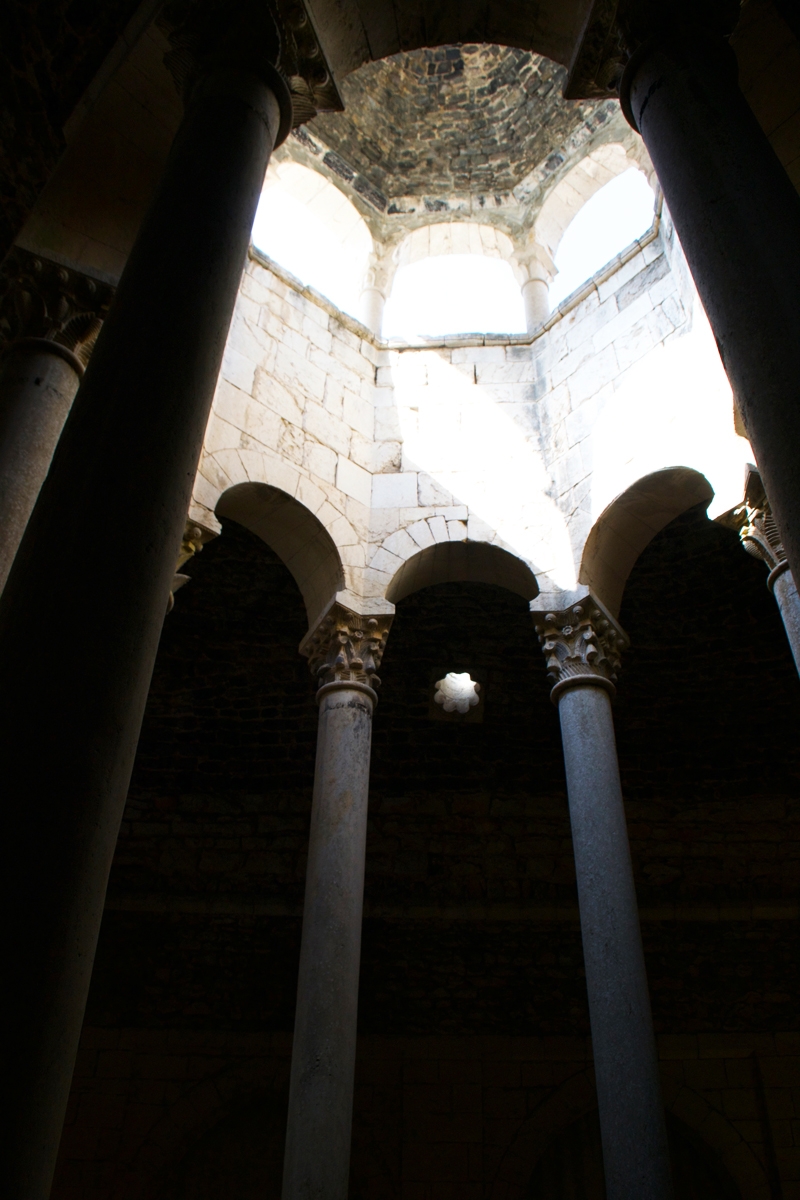 After exploring the old city walls, I walked around the Monastery, explored the interior of the Arab Baths and took in the outside of Saint Felix’s Cathedral before circling back later in the day and touring the inside. Every street you walked down in Girona looked like it was straight out of a perfectly preserved medieval town, which I absolutely loved. It had all the romance and charm of Europe contained within a few short blocks. 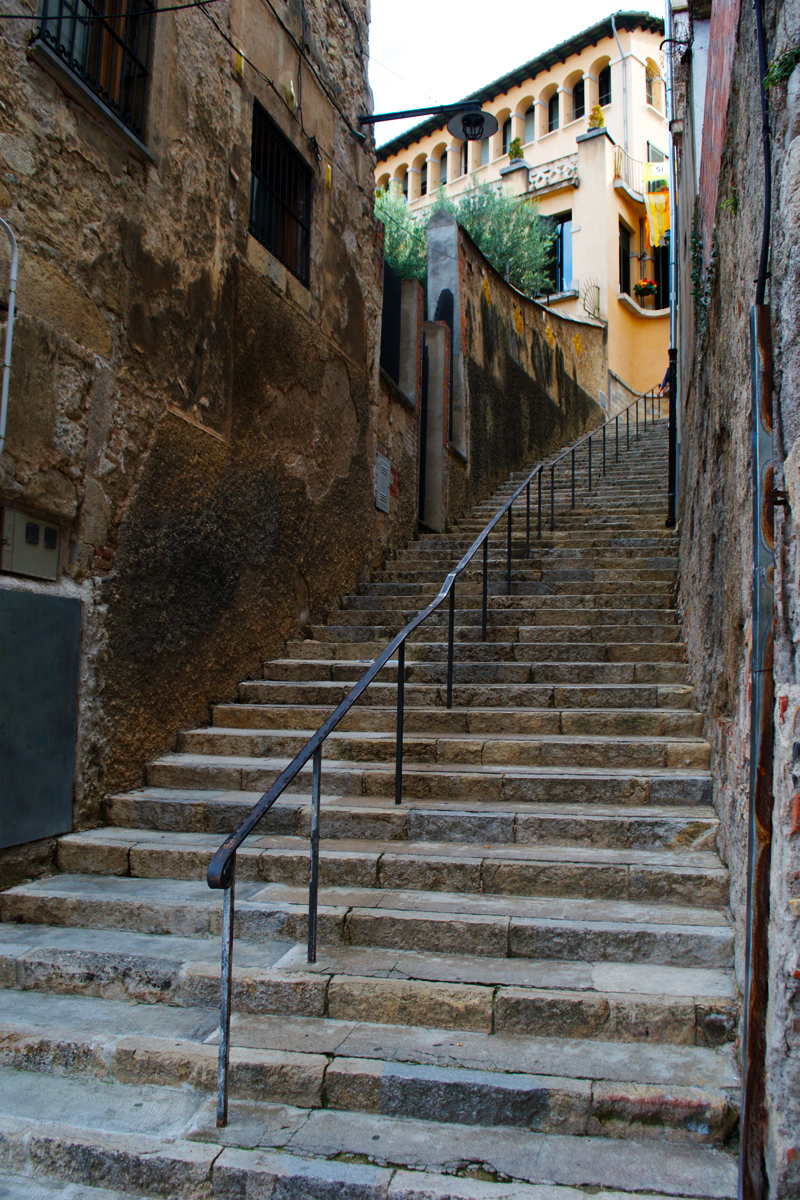 It was at this point that I decided to cross the Onyar river and get myself a treat from Casa Moner. I crossed the river at a few different bridges, but my favourite is the bridge that I’m fairly certain was designed by the same architect as the Eiffel tower. The river is flanked on either side with gorgeous colourful houses that reminded me quite a lot of Florence. So pretty! 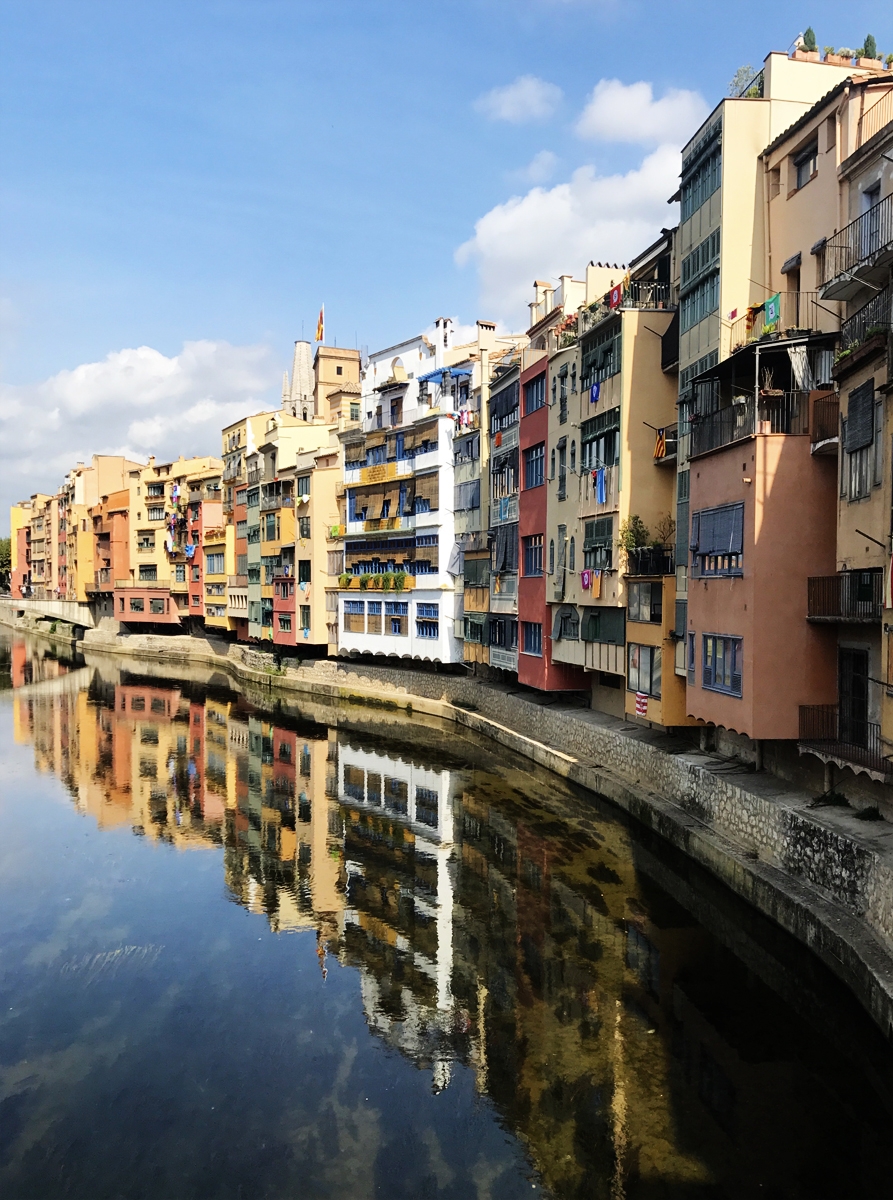 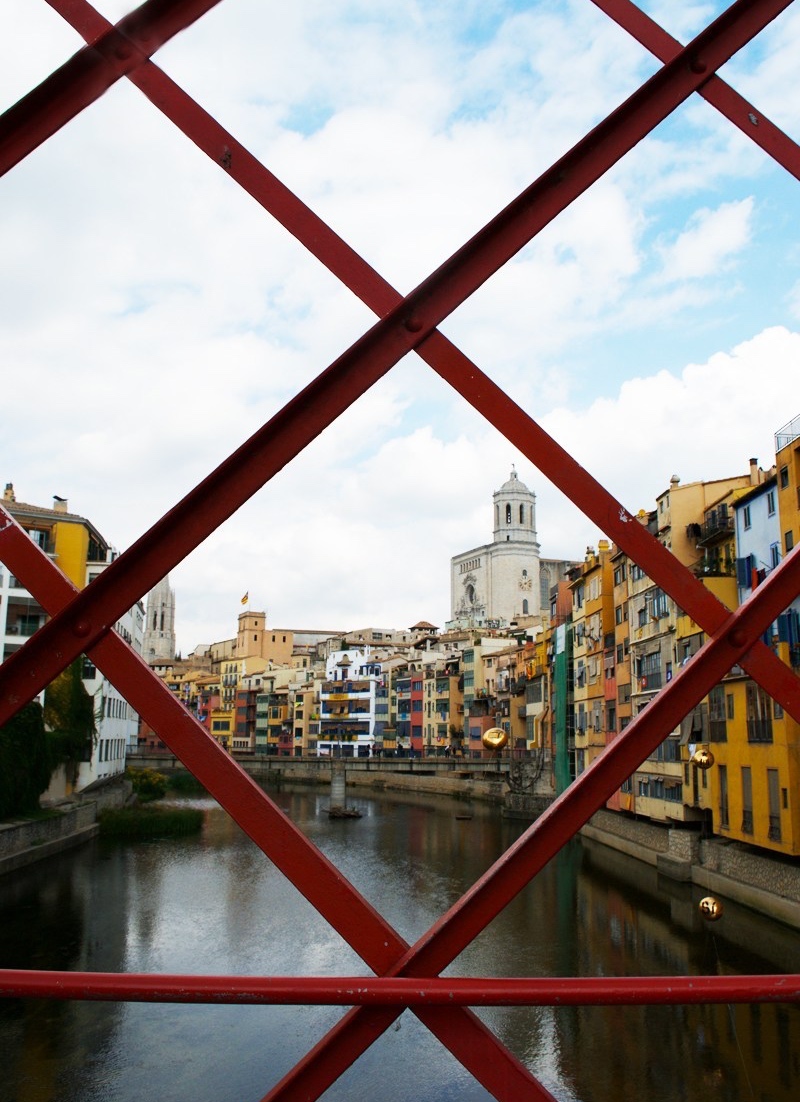 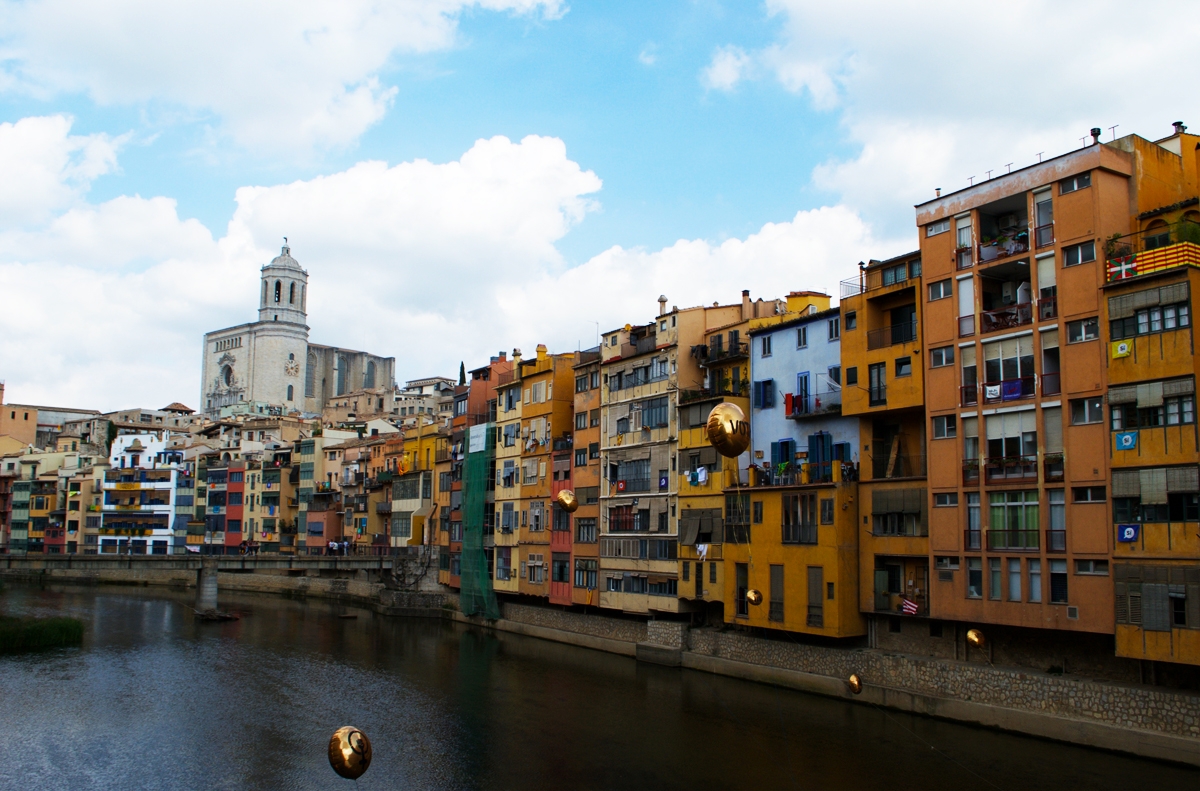 I also spent a decent amount of time browsing stores in the newer part of town and just meandering down all the streets I could to try and find other hidden gems. I found some gorgeous ceramics along Career de la Forca by a woman named Helena Prat. Check out her Instagram here for a full range of her gorgeous turquoise blue ceramics. 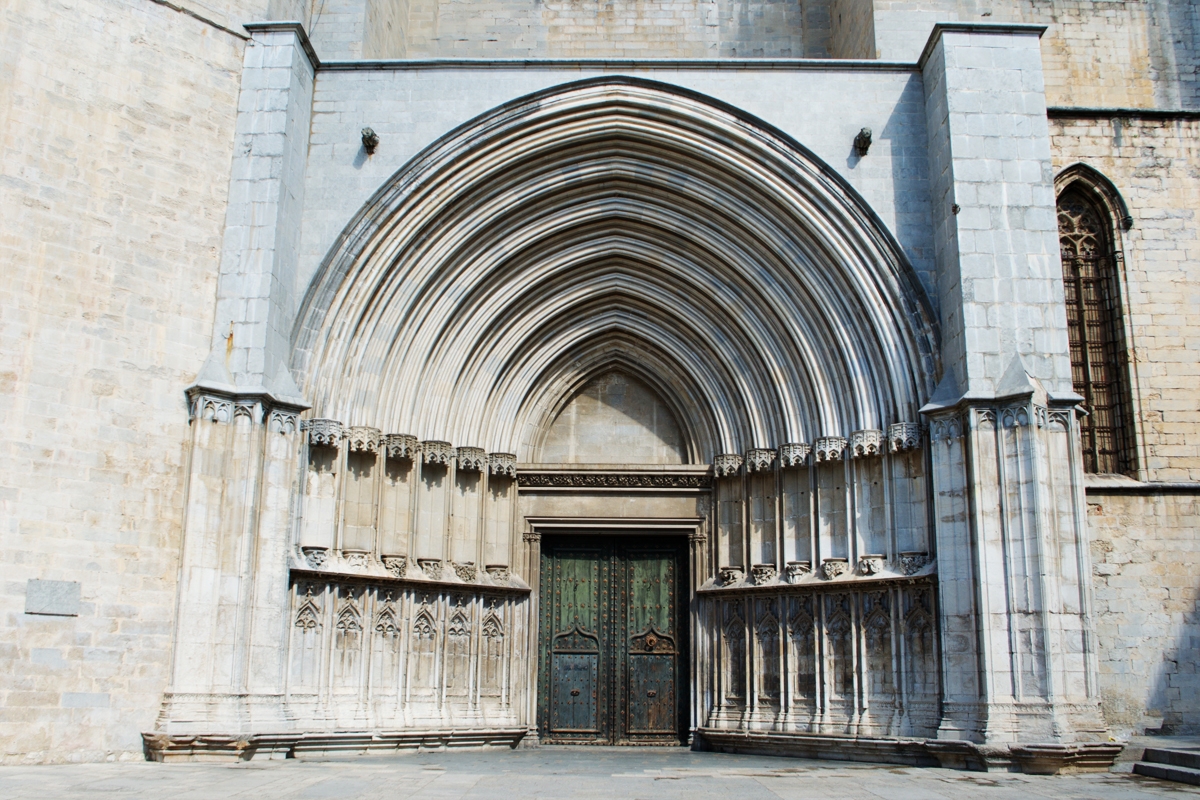 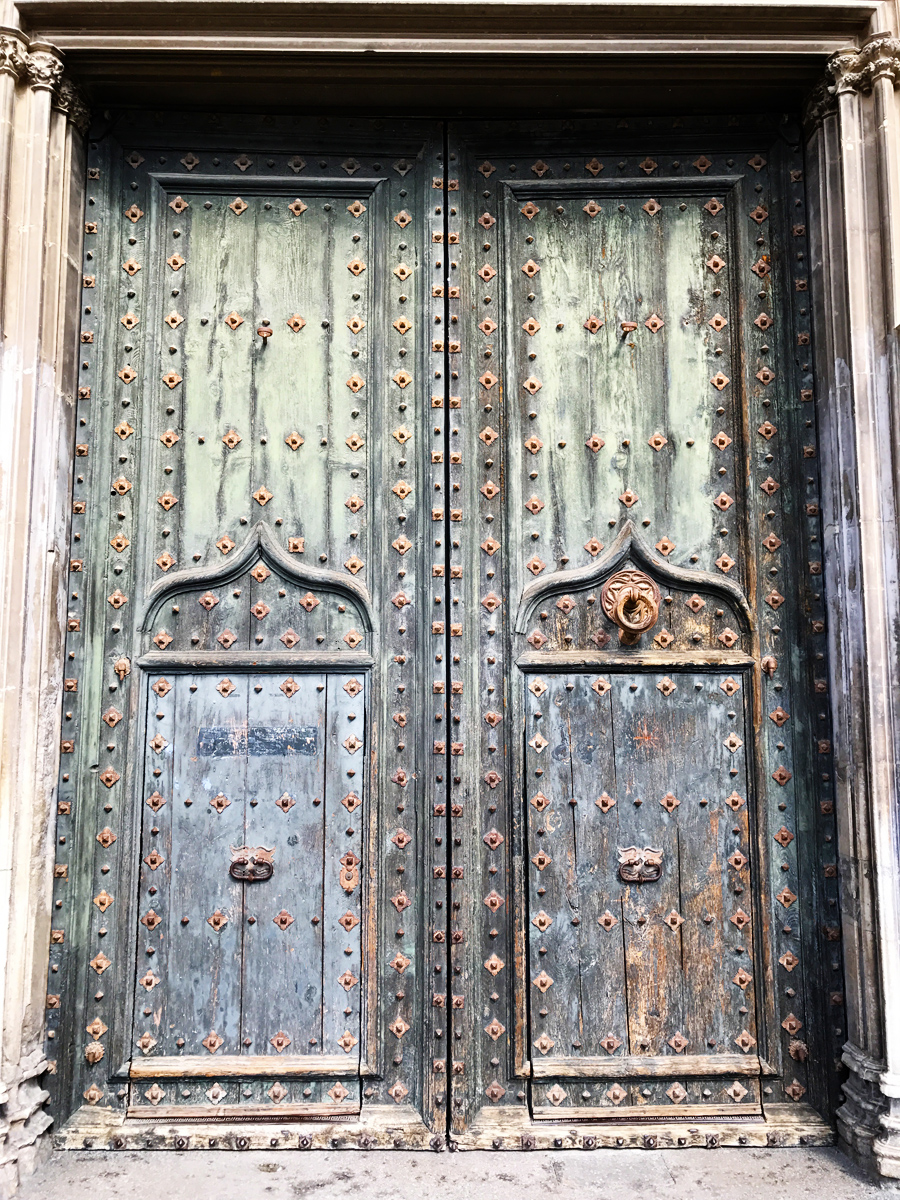 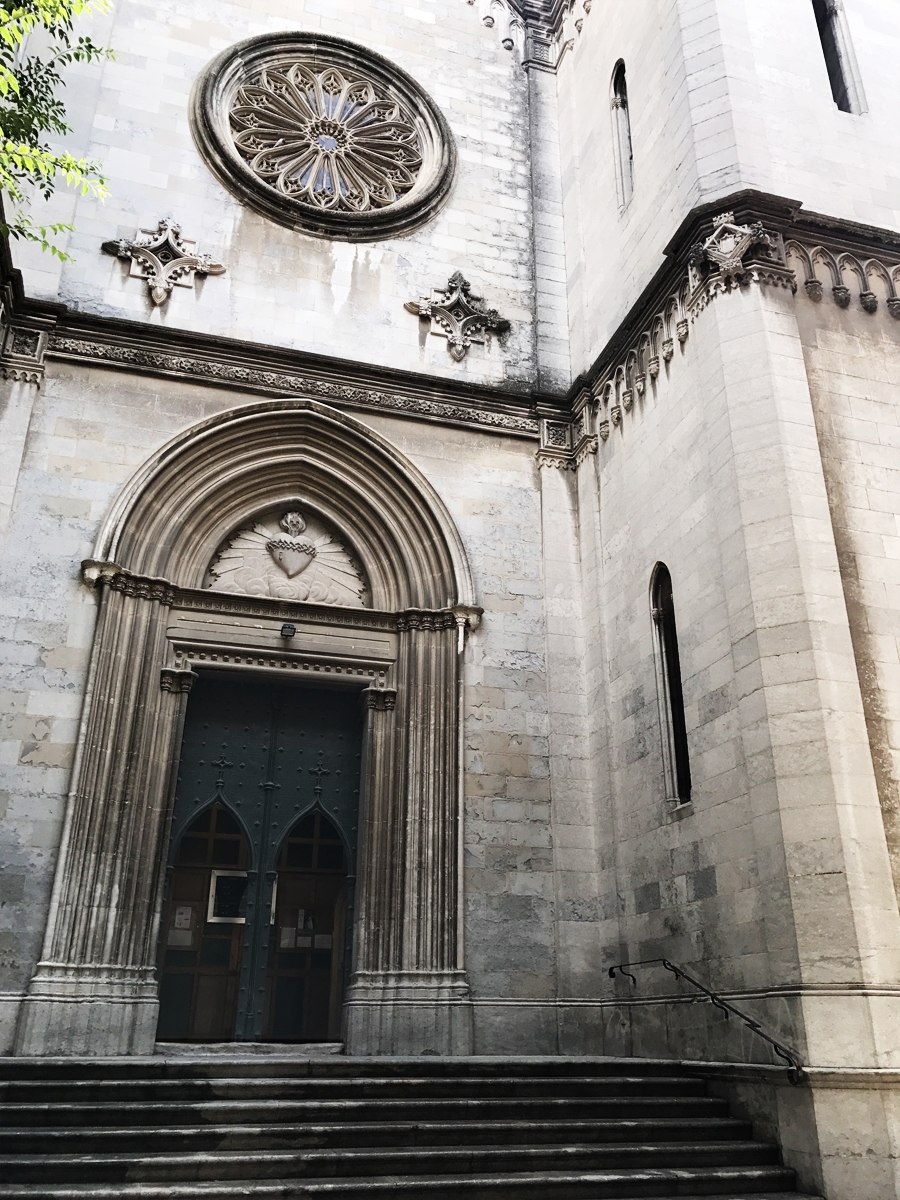 Girona is mainly used as the city of Bravos in Game of Thrones. There are countless alleyways that Arya is seen running through in various points of the show. I’m tempted to recommend you watch the show before you go, just so that it’s fresh in your mind and it will be all the more thrilling to see the actual locations where they filmed in person. Some of the main streets that you’re going to want to check out are: 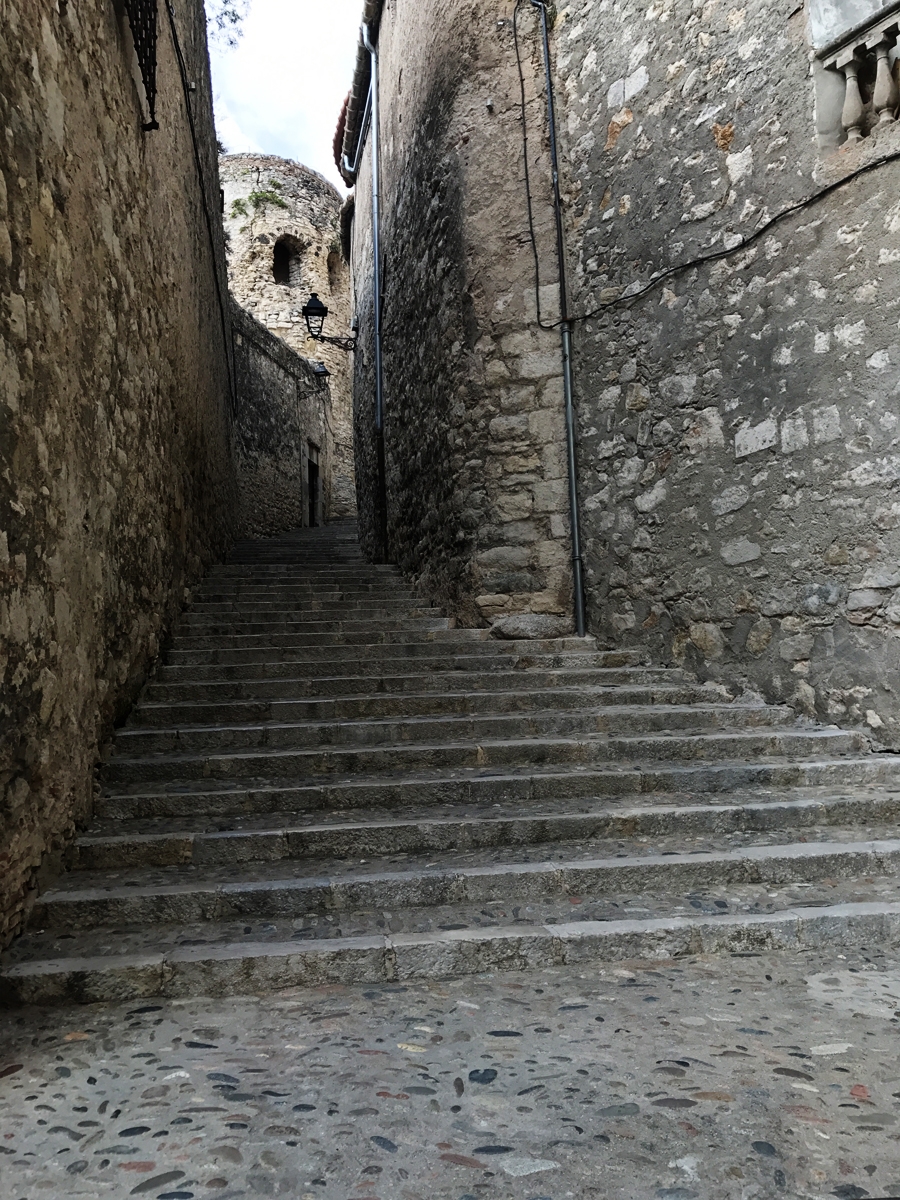 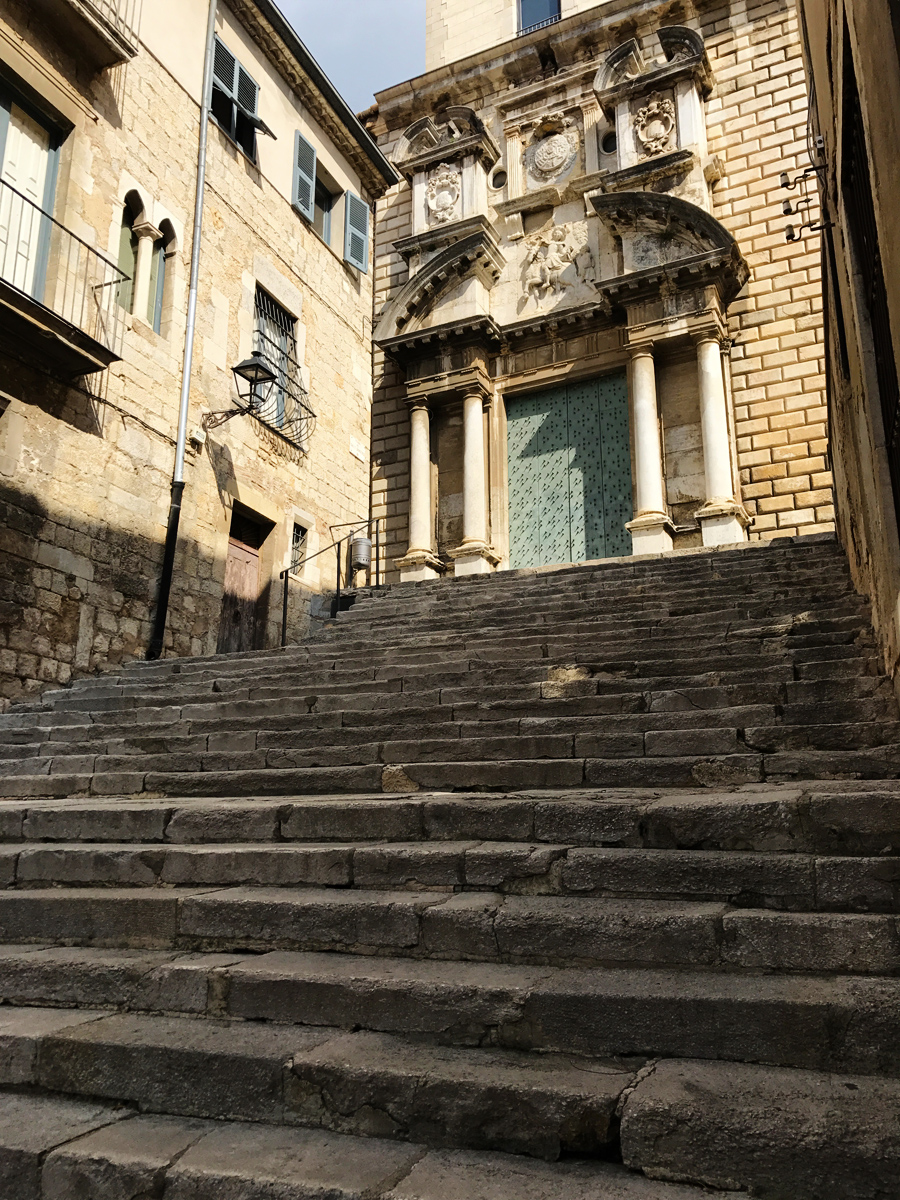 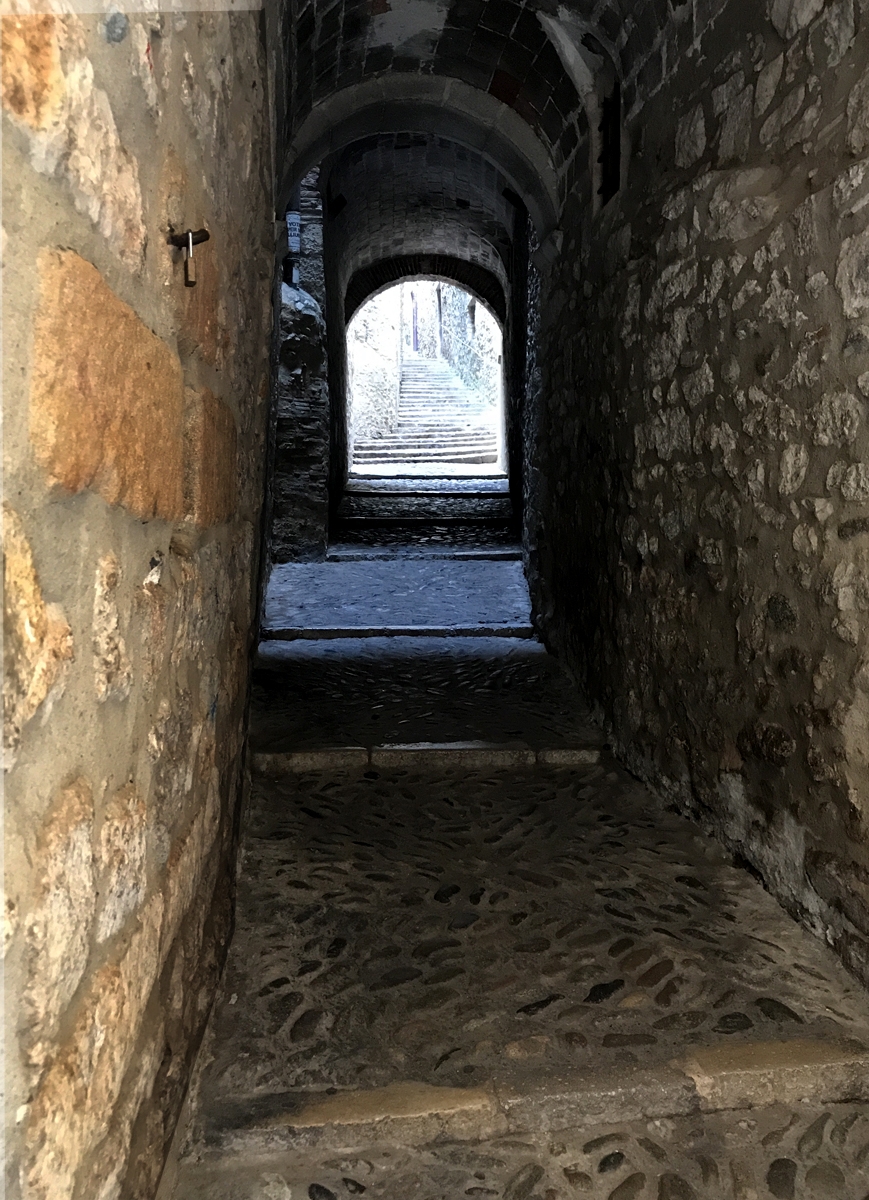 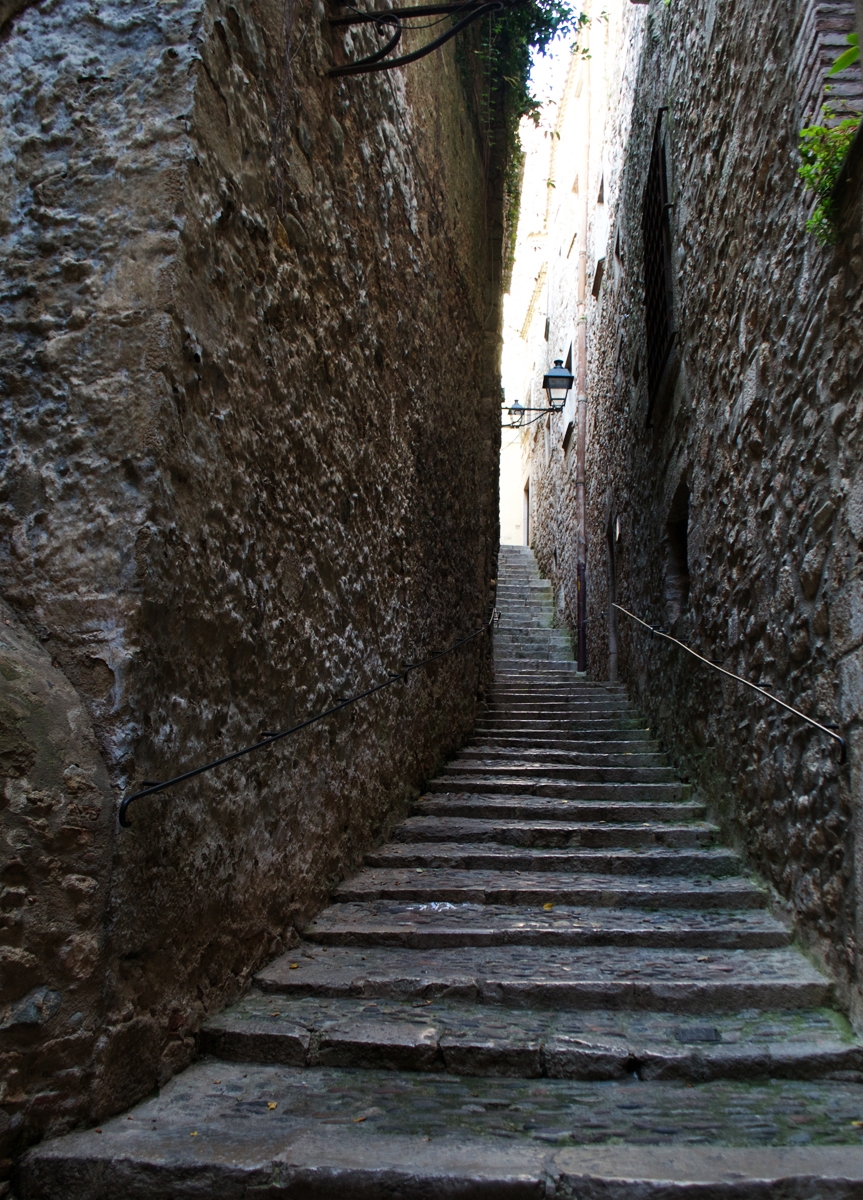 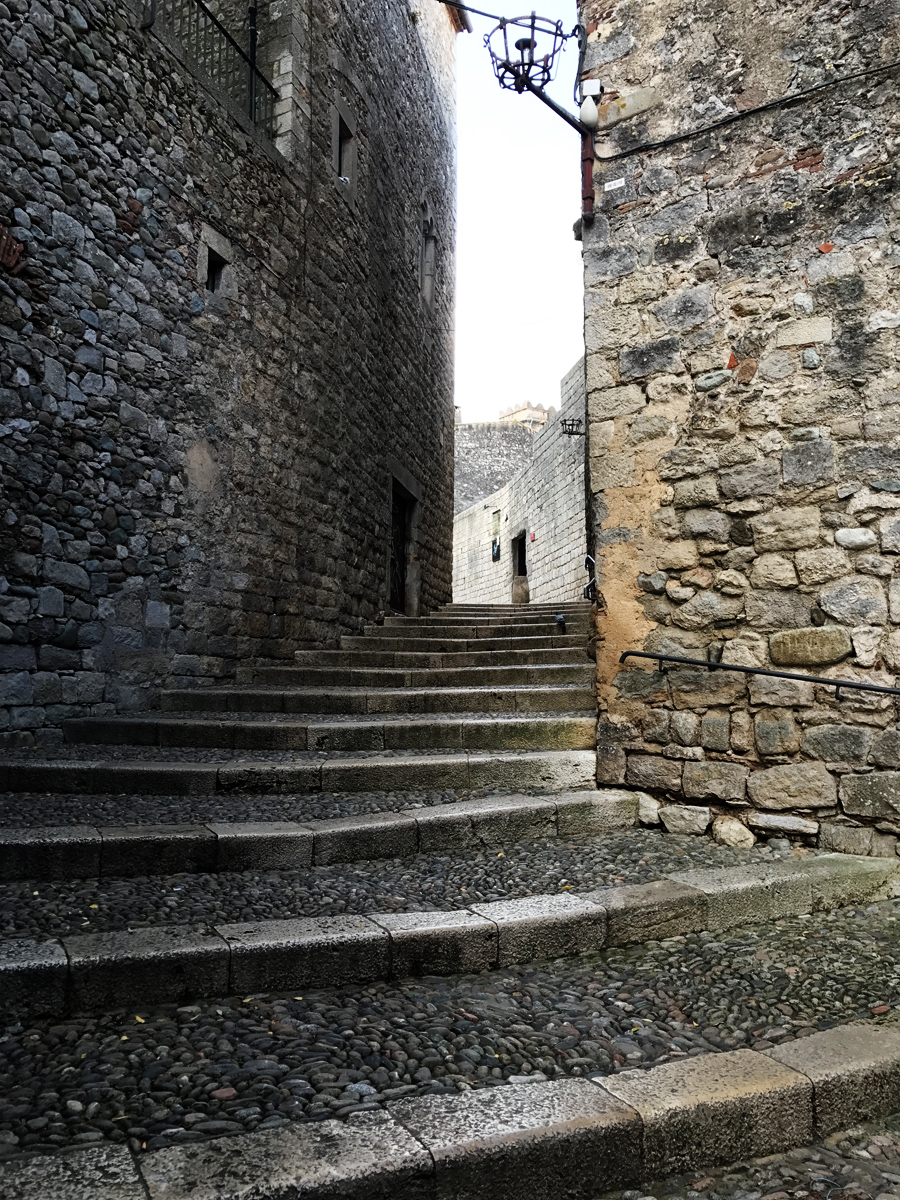 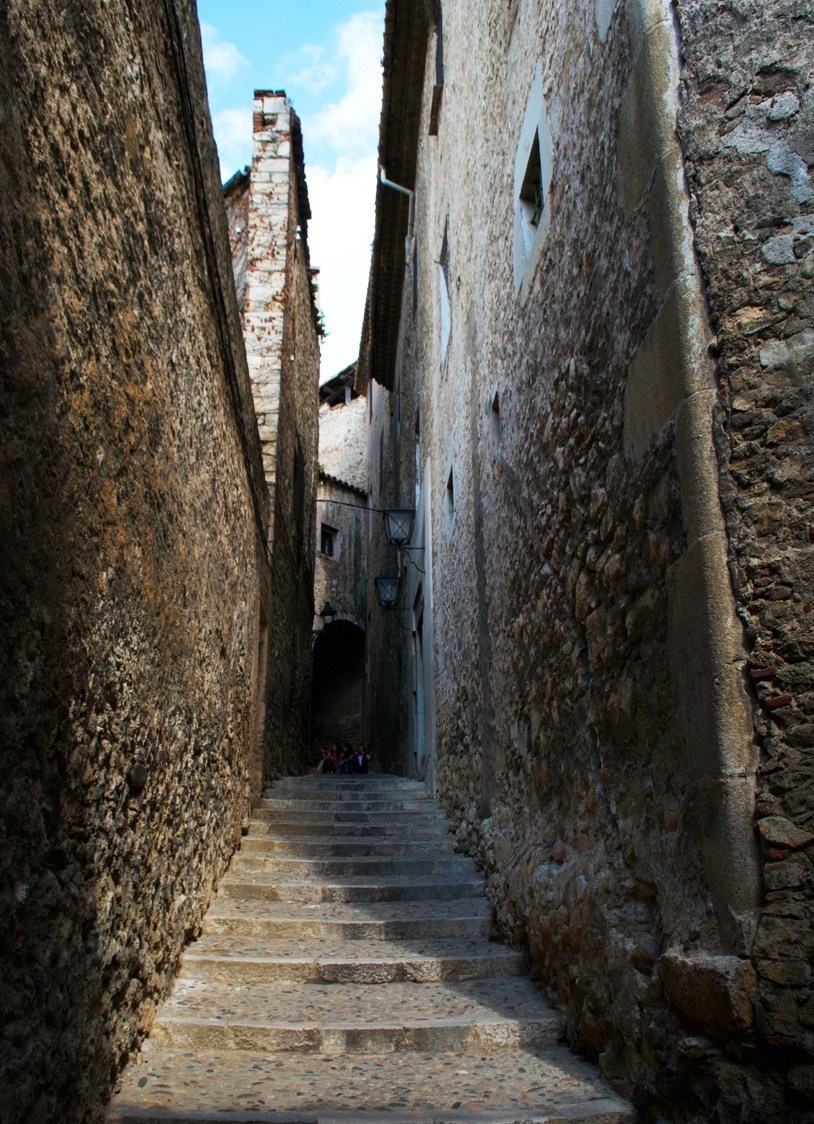 In addition to the many cobblestone alleyways, quite possibly the most iconic filming location in Girona was filmed at the Girona Cathedral. This is where the SHAME scene was shot and the steps leading up to the cathedral are just as intimidating in reality. For me, it was so cool to be able to see this in person. 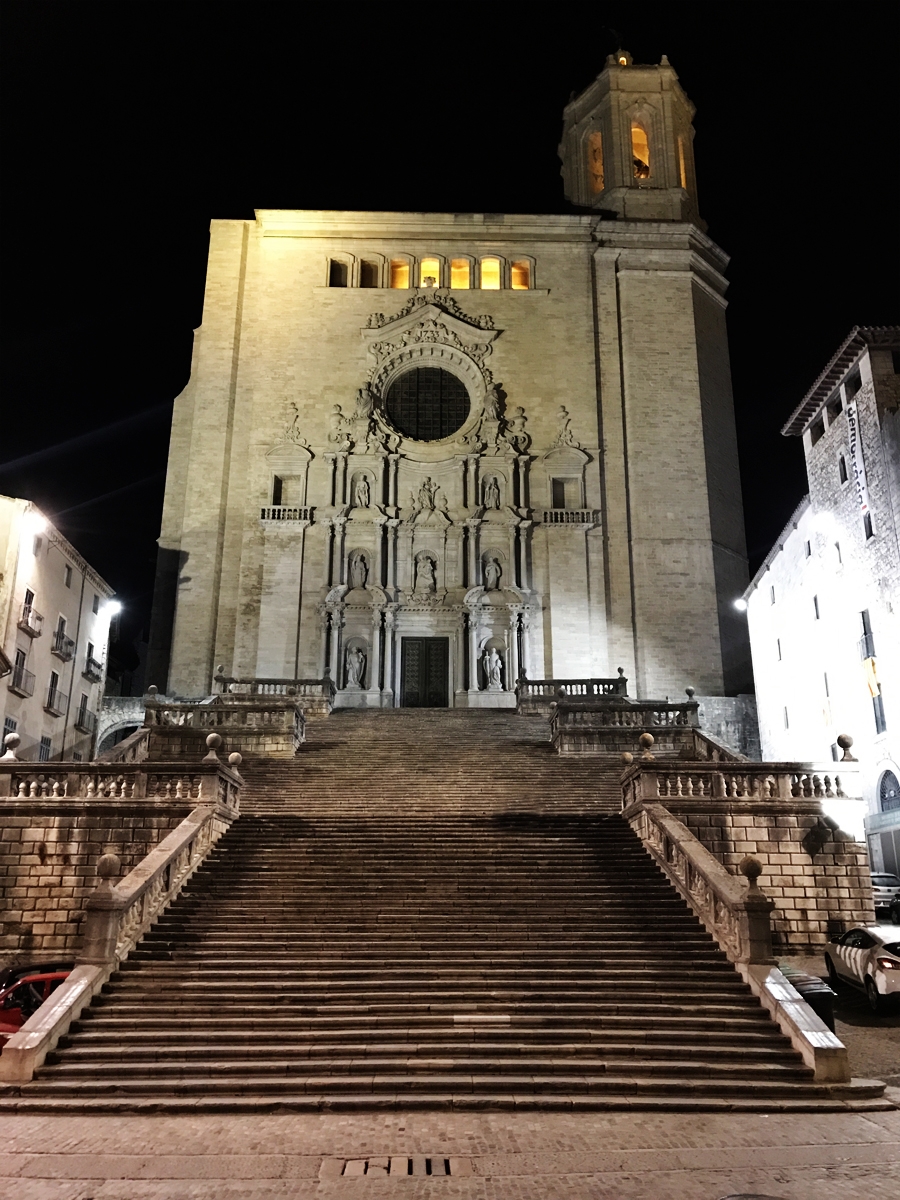 Overall, I had a great time staying in Girona and highly recommend that you consider visiting! Hope this inspires you to add Girona to your travel bucket list!