If you love Disney treats you may be familiar with the Dole Whip – the most delicious pineapple flavored frozen treat that’s available at Disneyland and Walt Disney World.

The Citrus Swirl is just as delicious but perhaps not as widely known.

So first of all, they were only available at the Magic Kingdom, at one cafe called the Sunshine Tree Terrace. But it 2018 the Citrus Swirl was replaced with the Orange Swirl! It’s a tragedy.

But the good news is that you can make it at home and enjoy it anytime – even when you are away from the parks! So let’s get to making this Citrus Swirl Recipe. 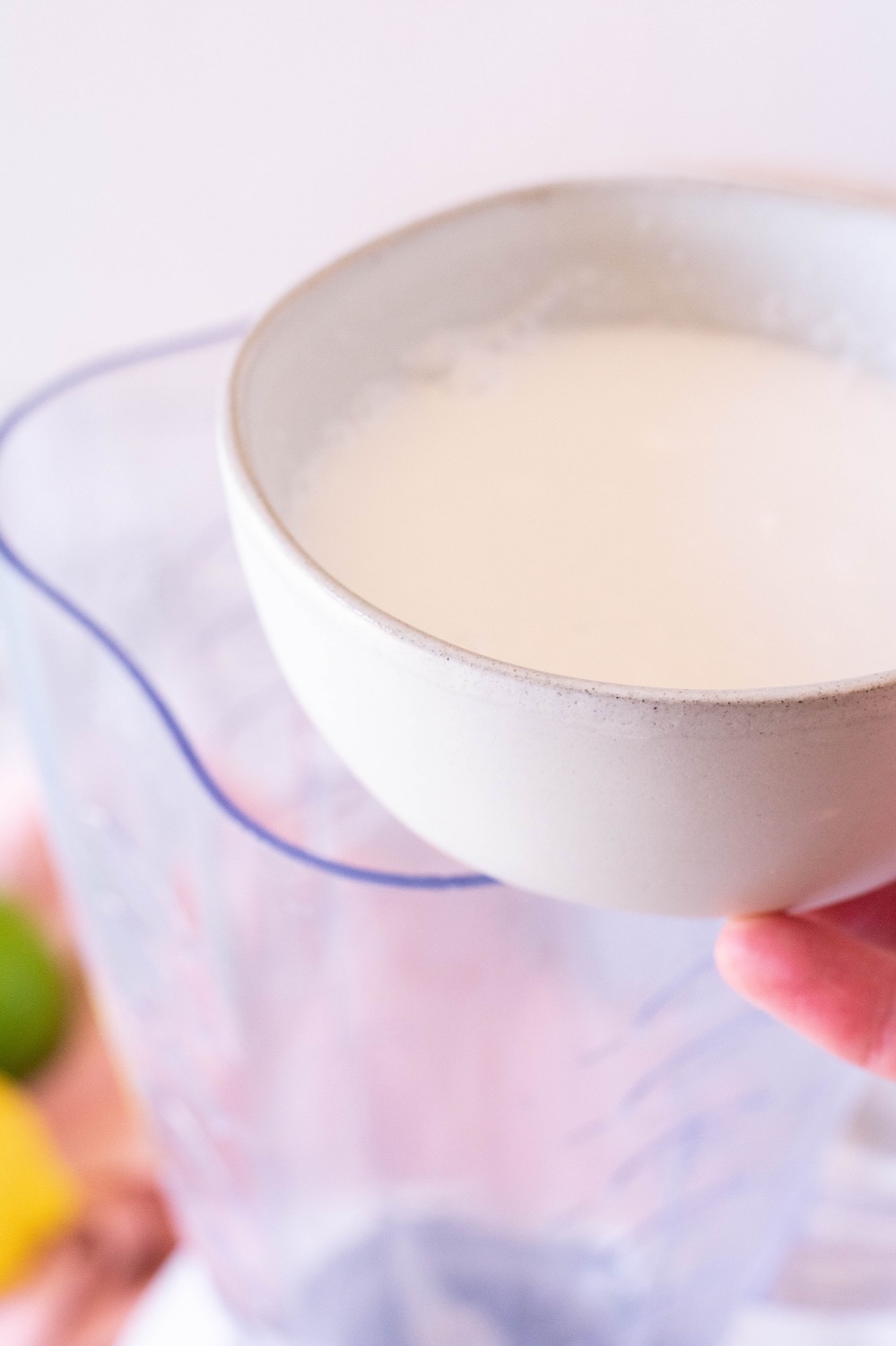 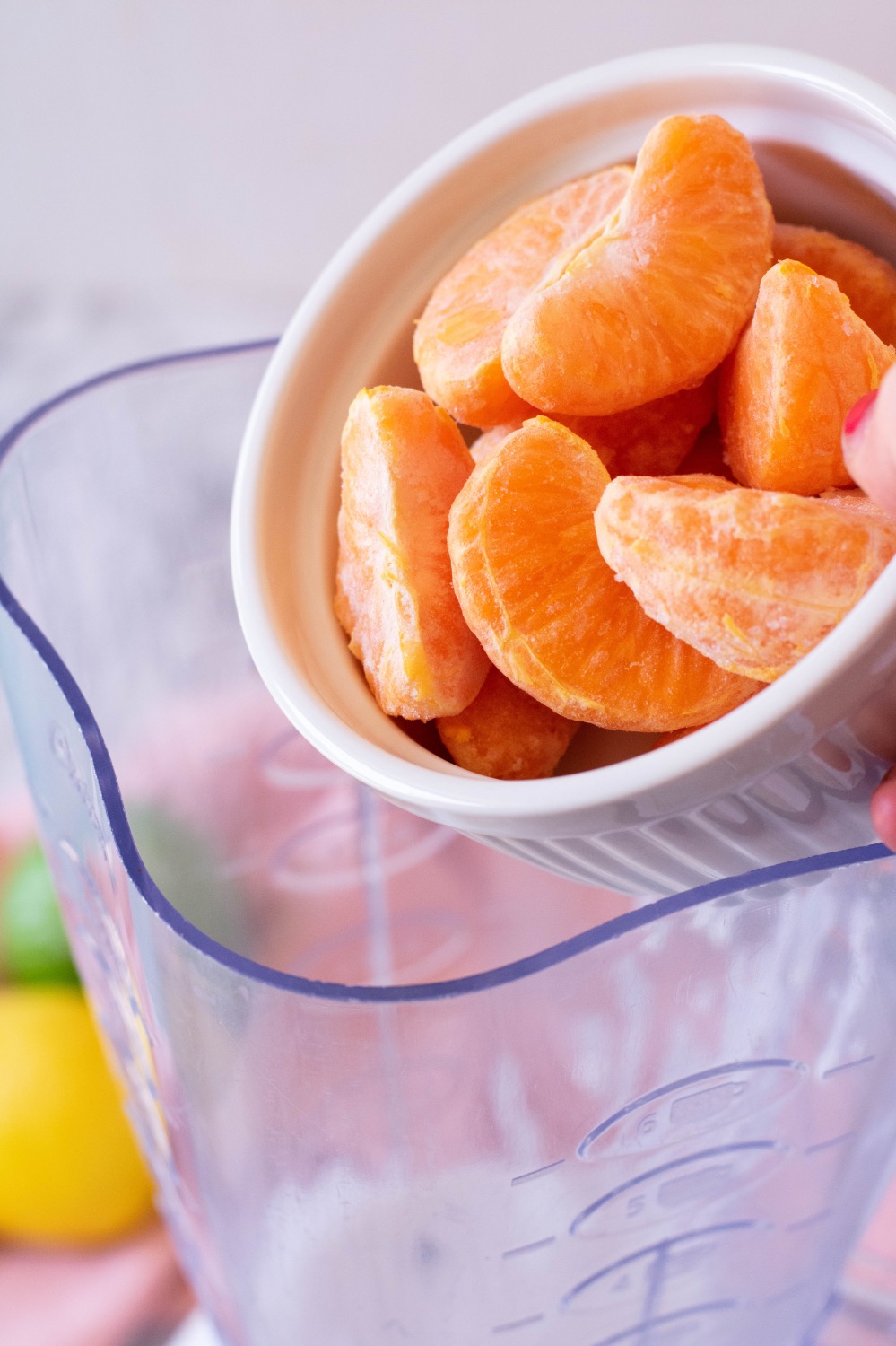 At least a few hours or a day before you are ready to serve your Citrus Swirl, peel and prepare your oranges. Make sure they are extra ripe and be careful to remove lots of rind.

Then place your orange slices in the freezer. You will want your oranges to be completely frozen, which will take at least a few hours.

You can also keep oranges in the freezer for anytime use! 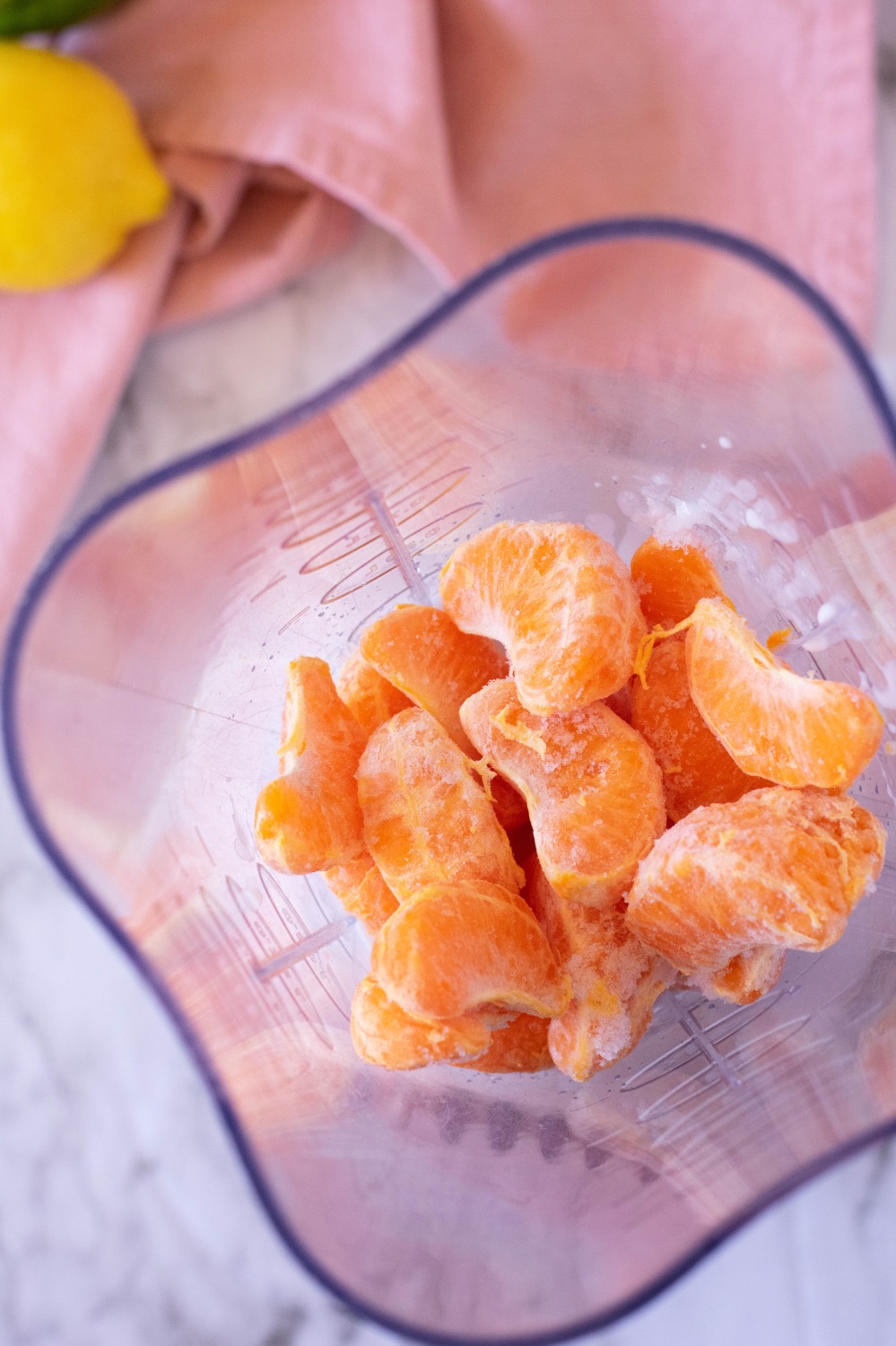 Once your oranges are frozen and you are ready to begin creating your Citrus Swirl, start by adding coconut milk to a blender. Be sure to use the type of coconut milk that comes in a can. It’s full fat coconut milk and very flavorful.

Coconut milk that comes in the refrigerated section by the almond milk and regular milk will not work for this recipe.

Always add your coconut milk to the blender first and then add your oranges on top. 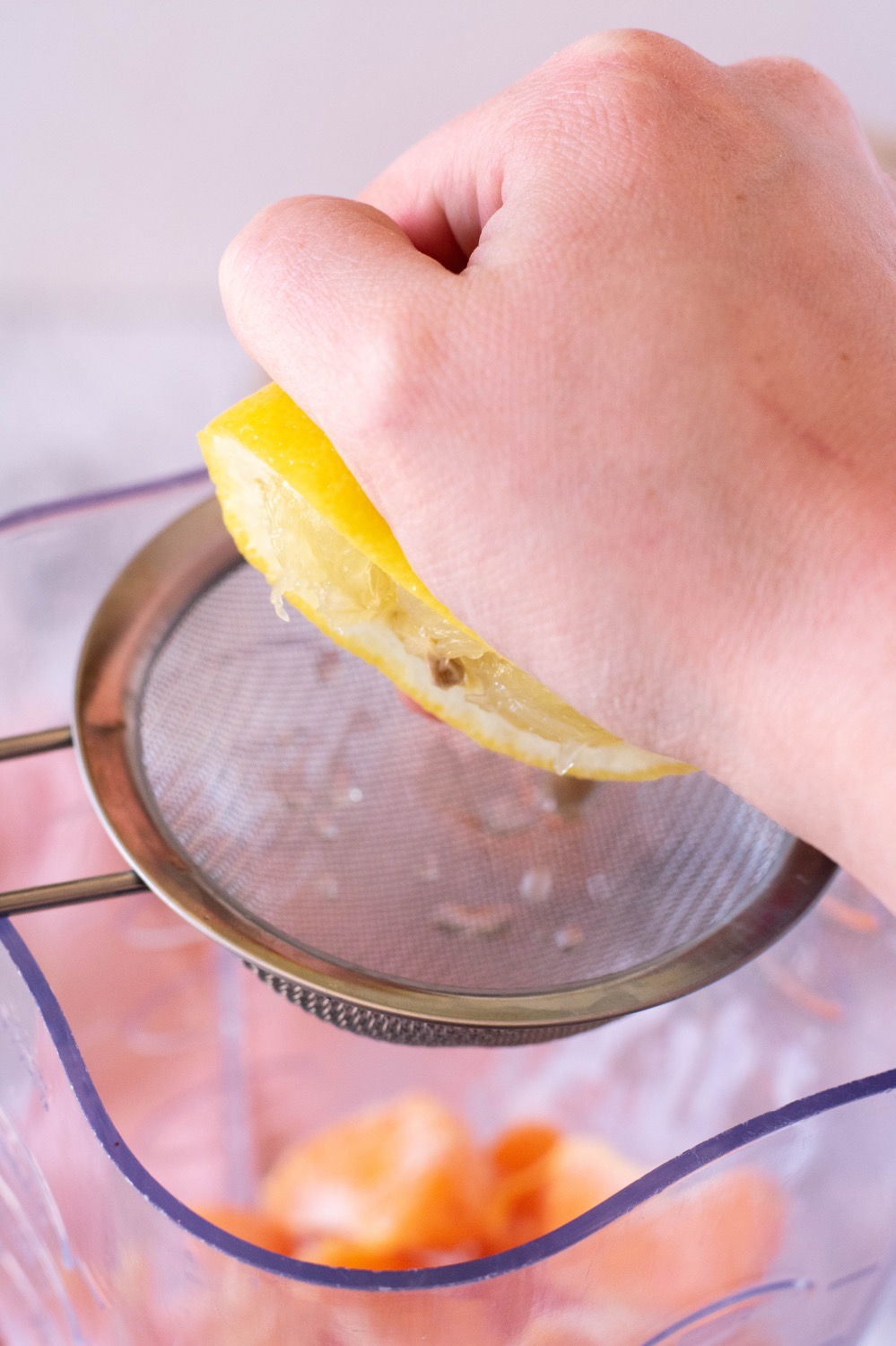 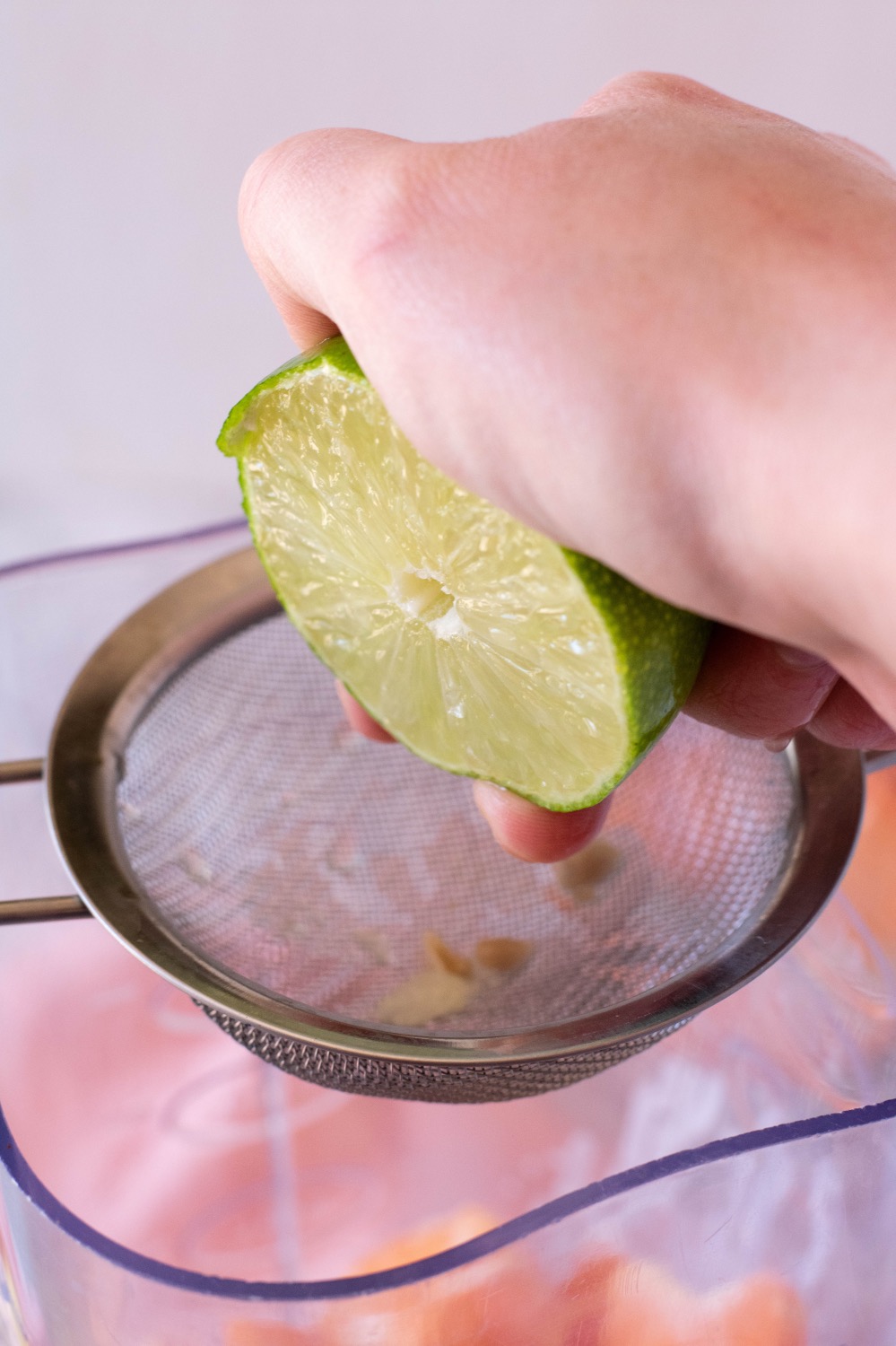 After you have added your coconut milk and frozen oranges, but before you blend, squeeze 1-2 tablespoons of fresh lemon and lime juice into your blender. This is what gives your Citrus Swirl its citrus punch!

I used a strainer to prevent any seeds from dropping into the blend. But you could use a juicer to squeeze your lemons and limes. Then remove the seeds and pour the juice into your blender.

If you like your desserts extra sweet, you may want to add a tablespoon or 2 of honey. You can add regular white sugar in it’s place but if you do, be sure that it blends thoroughly and has time to dissolve to prevent a crunchy texture and inconsistent flavor. 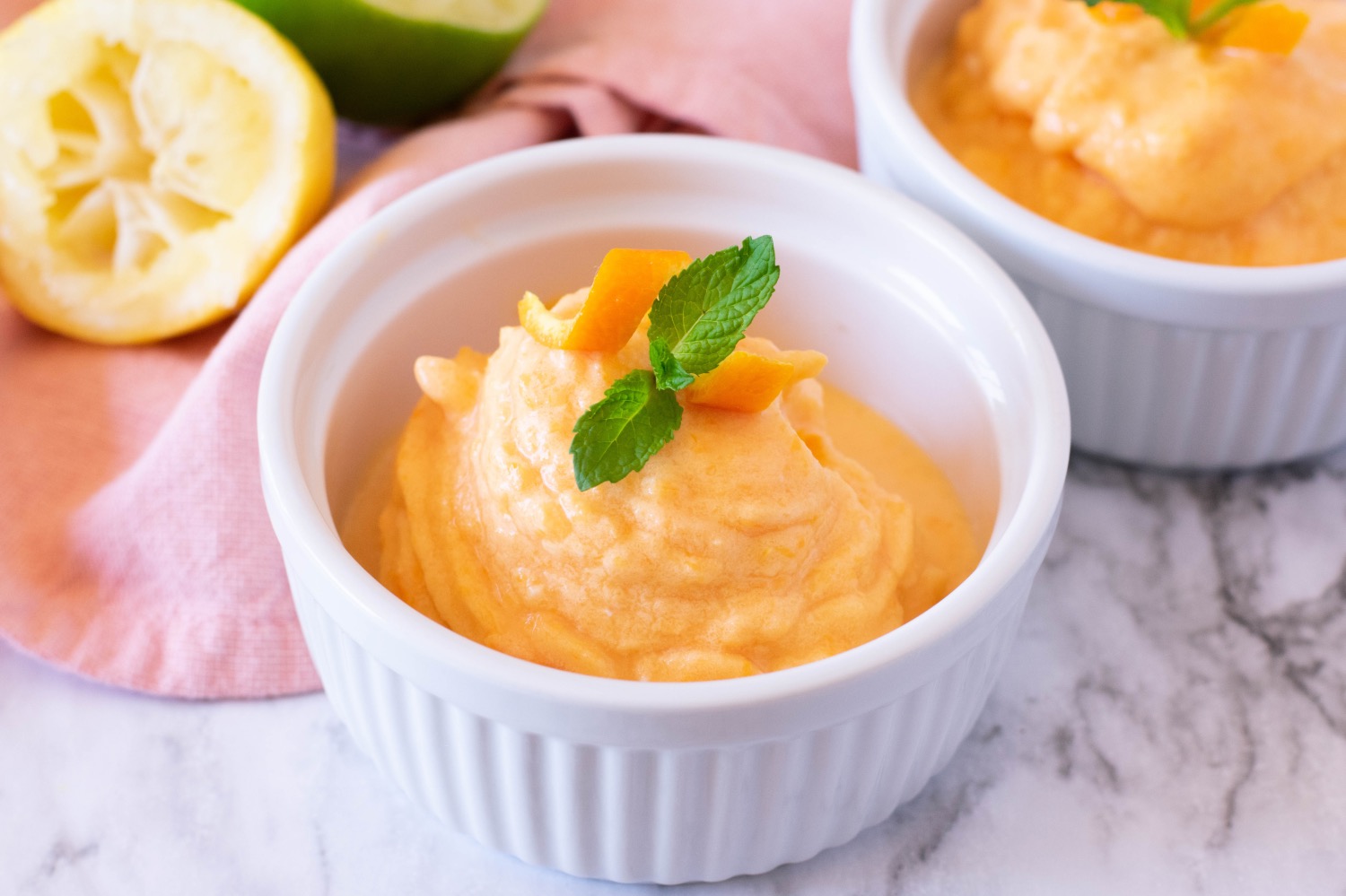 Once your ingredients are in the blender, it’s just a simple whip and go! That’s it!

There are a couple of helpful tips.

1. Scrape the sides as you blend. It will take a few scrapings to get your Citrus Swirl to the perfect soft serve consistency.

2. Pulse your blender or food processor to prevent blending it too much. 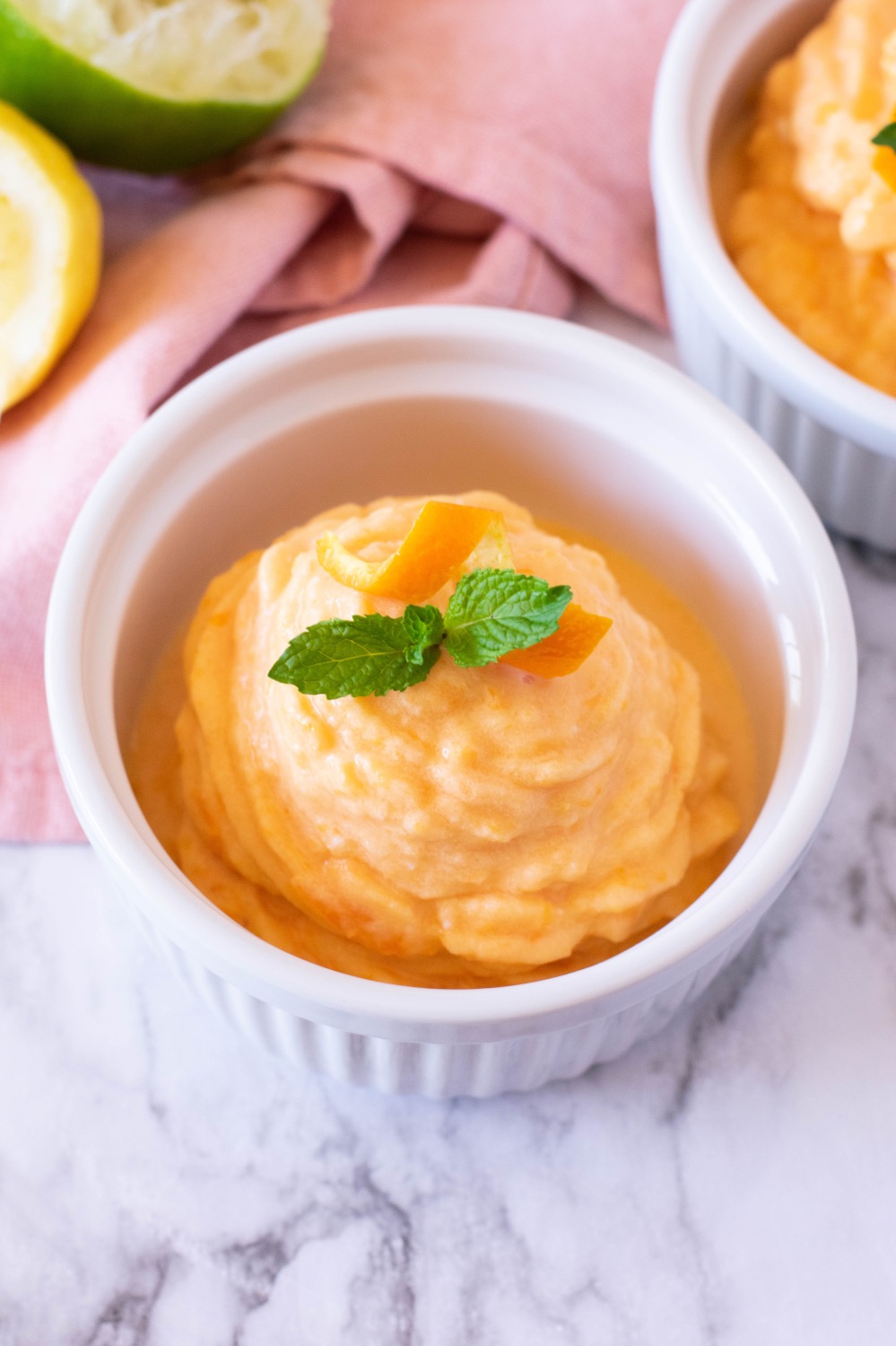 You can store your Citrus Swirl in the freezer, but it’s not my first choice. To prep your already made Citrus Swirl from frozen, allow the Citrus Swirl to thaw for a few minutes and then blend it again.

This will even out the texture bringing it back to a soft-serve like consistency. 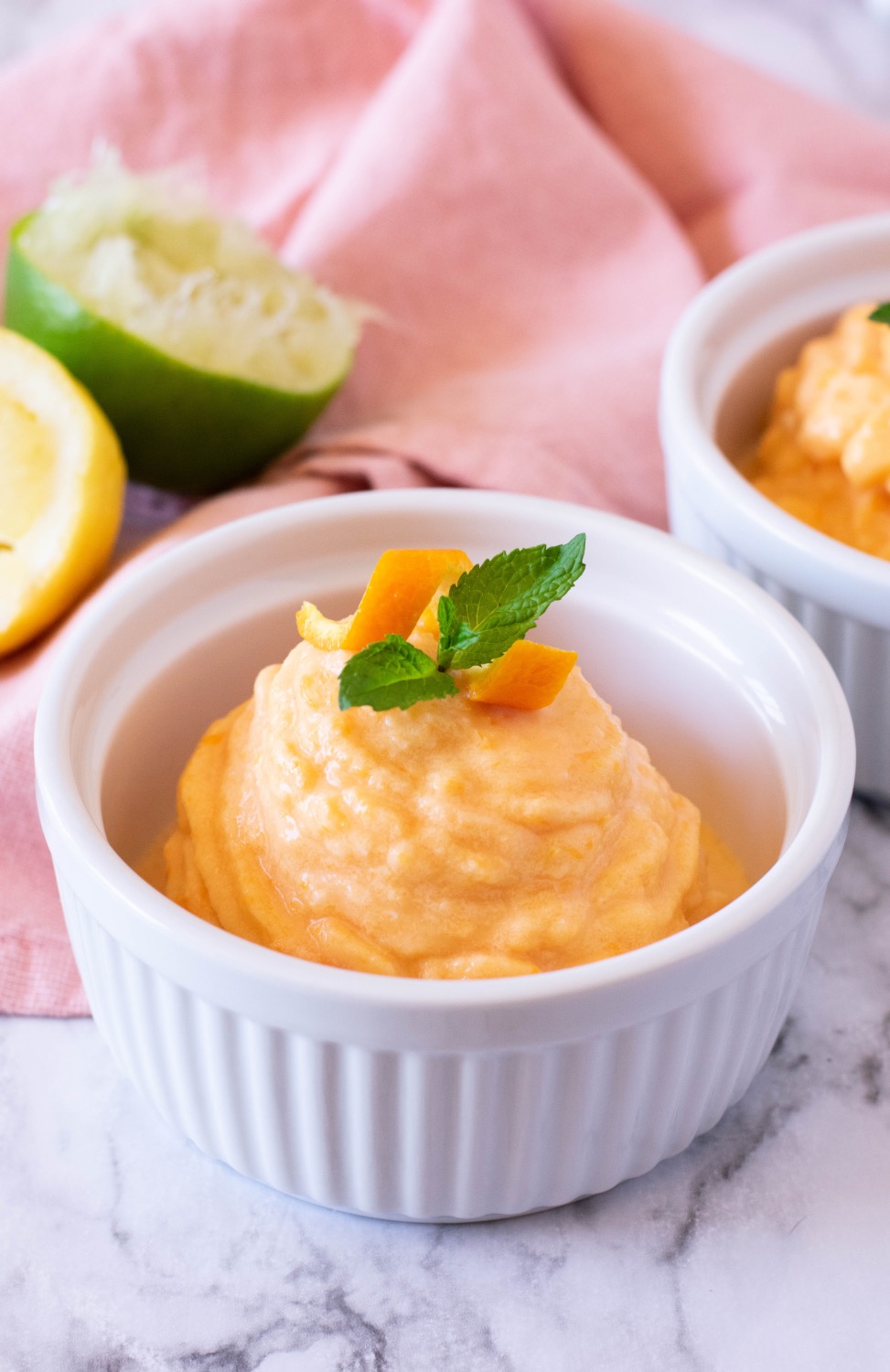 Citrus Swirls are traditionally served on their own, but you could also make a Citrus Swirl Float by topping a glass of orange soda with your Citrus Swirl Frozen Dessert! 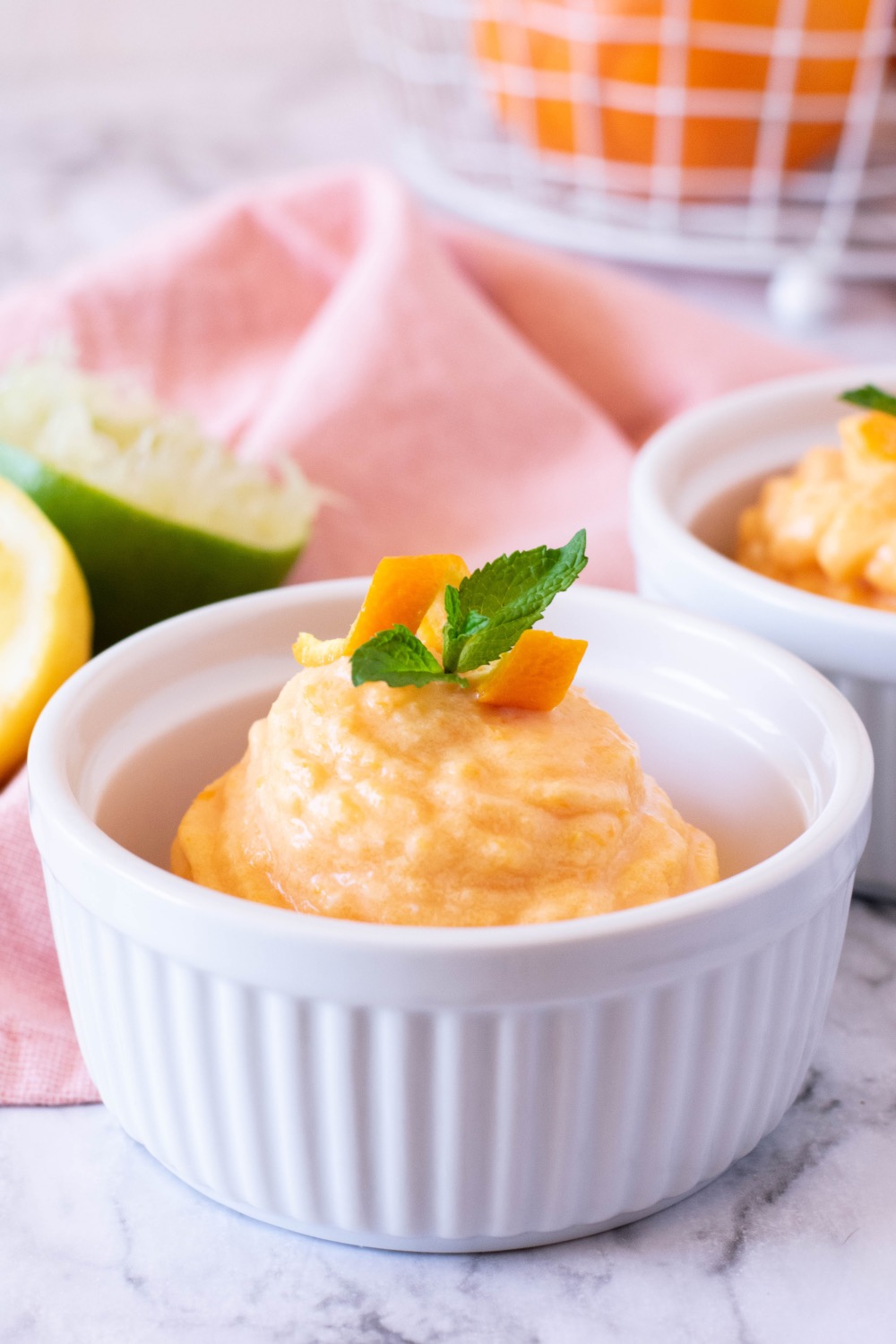 Hey and I’m no Disney purist, so I hope it’s okay to suggest this twist: replace the orange soda with orange juice for a healthier Citrus Swirl Float! The Dole Whip Float is served with pineapple juice and not pineapple soda, so topping orange juice with Citrus Swirl sounds just perfect. 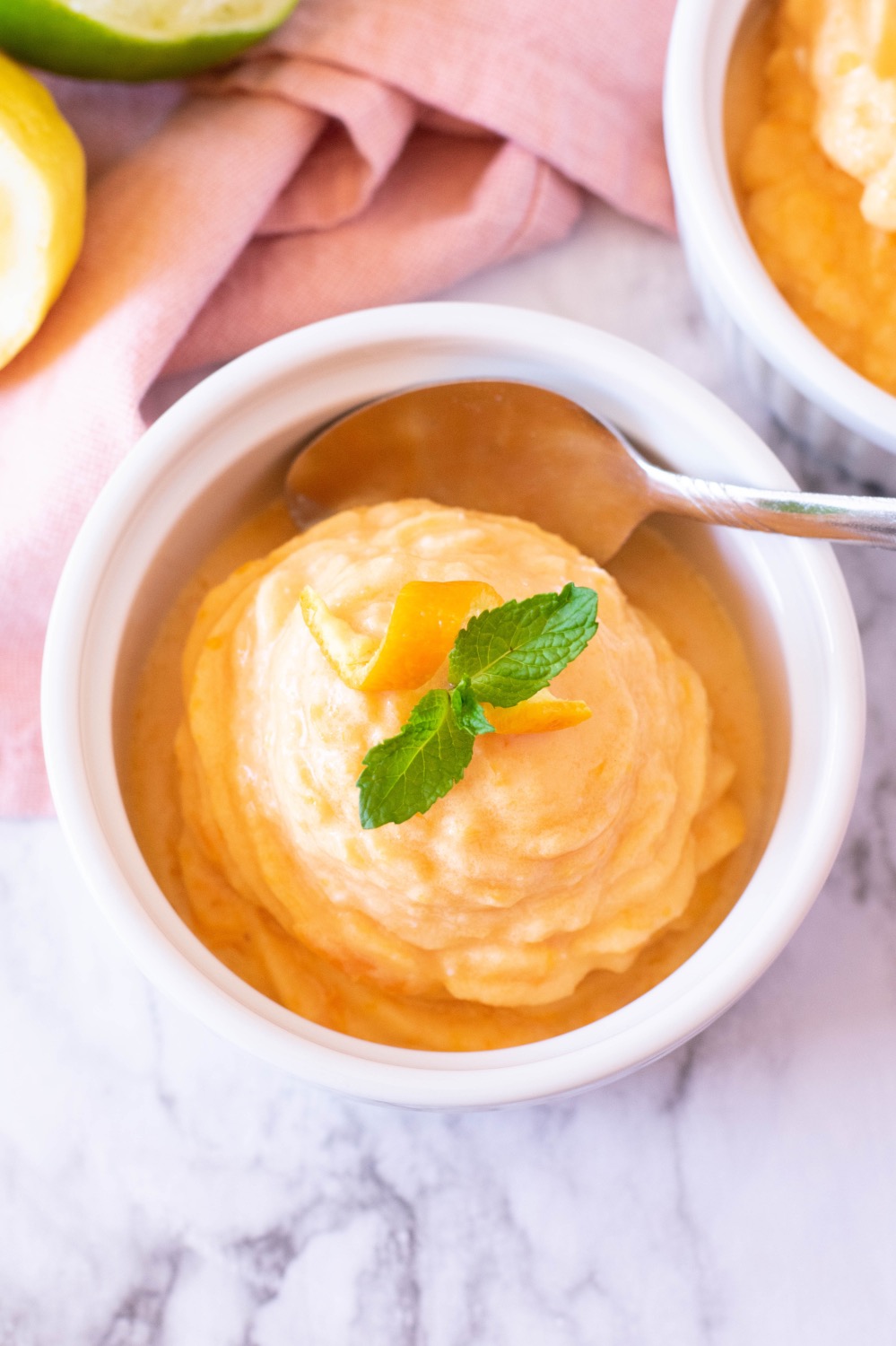 If you are going for an adult look, you could top your Citrus Swirl with a garnish of orange peel and sprig of mint. It gives it just a touch of pretty finishings that make this Citrus Swirl irresistible. 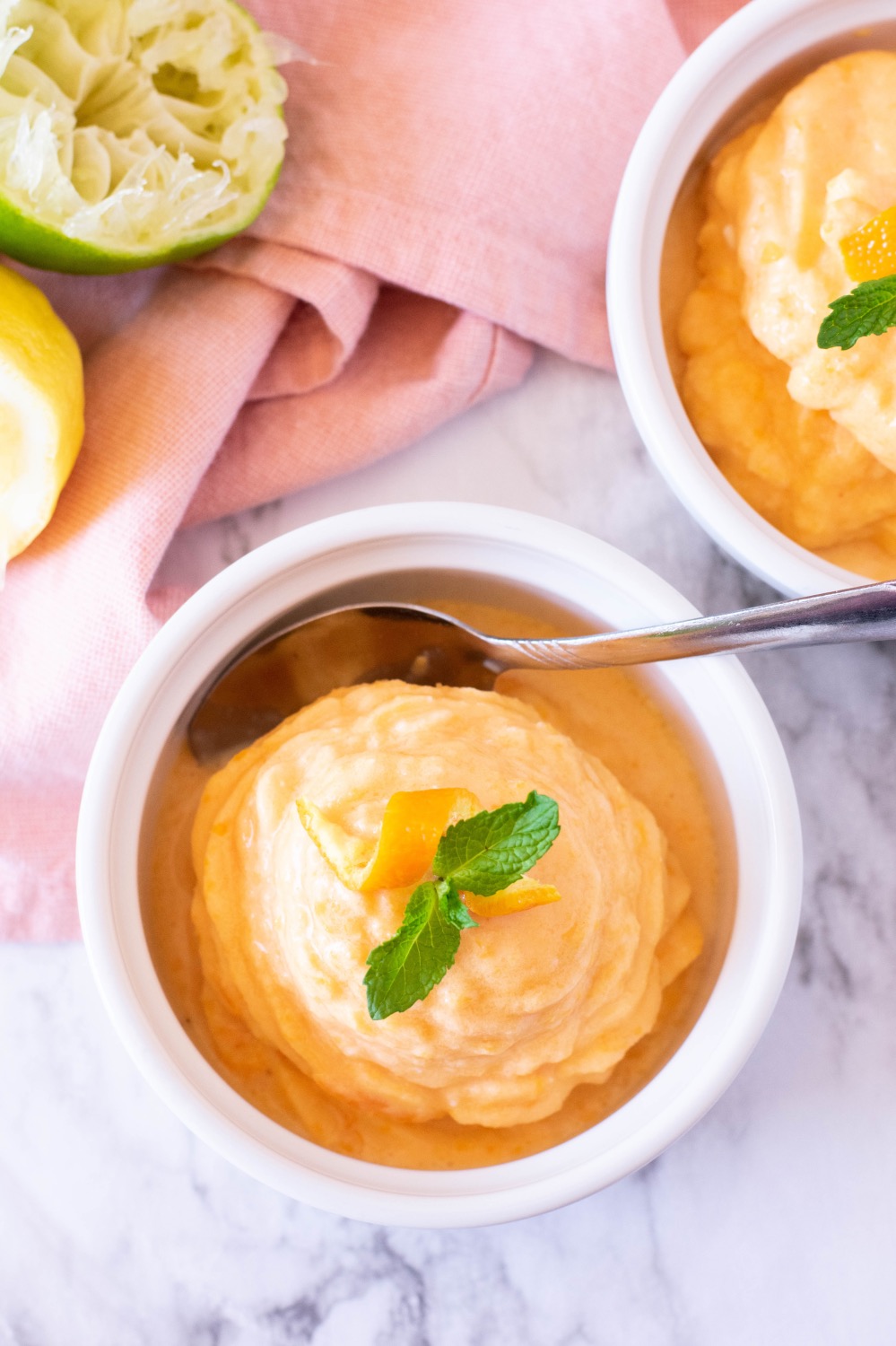 The Orange Bird is a character created by Disney for the Florida Citrus Commission (a Disney Sponsor.) The mascot appeared in Magic Kingdom’s Adventureland at the Sunshine Tree Terrace, where the Citrus Swirl can be found.

The Orange Bird was created in 1970 and even had songs with Anita Bryant.

Eventually, on April 17, 2012, the Orange Bird made a proper return to the Sunshine Tree Terrace. 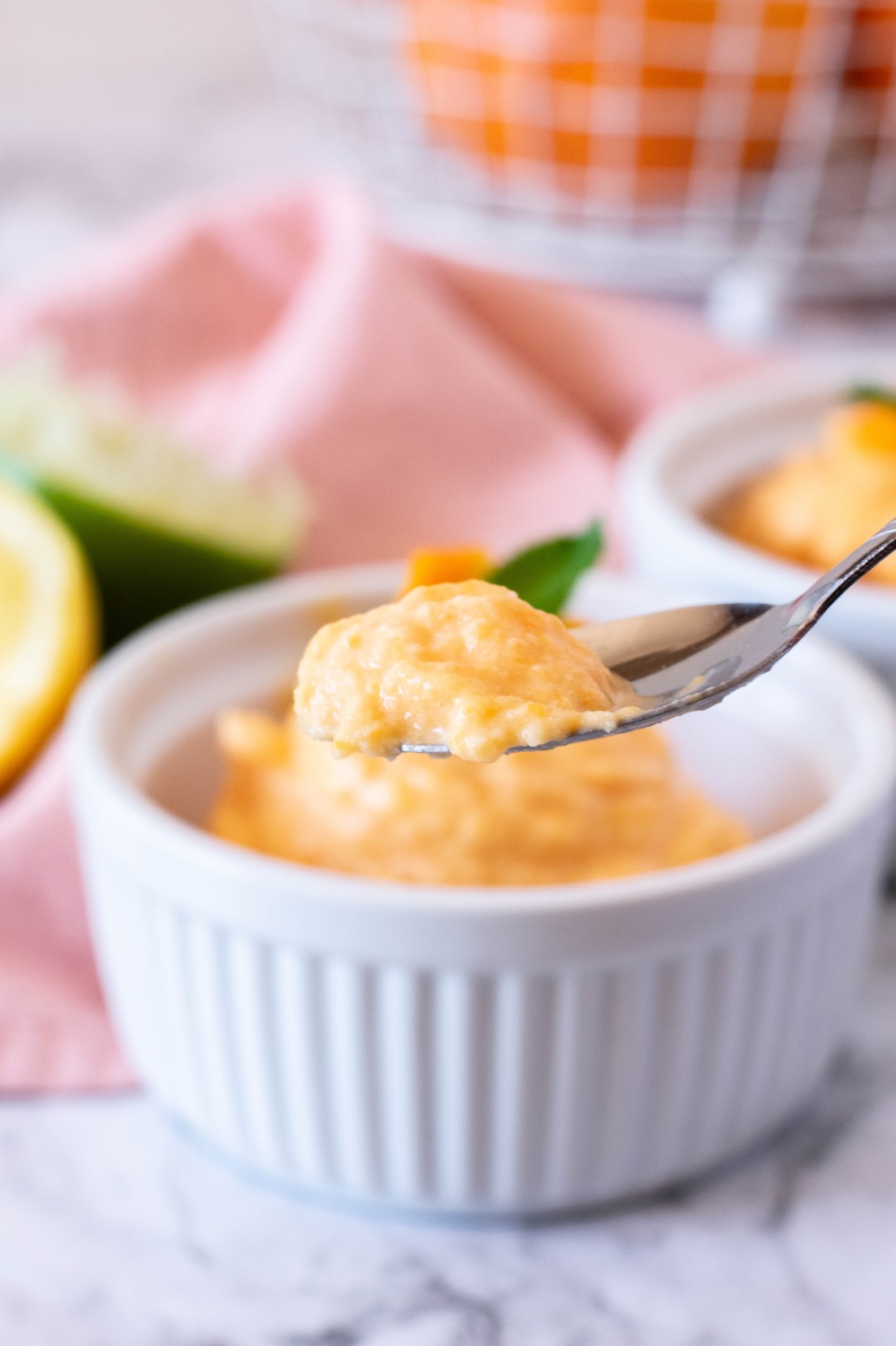 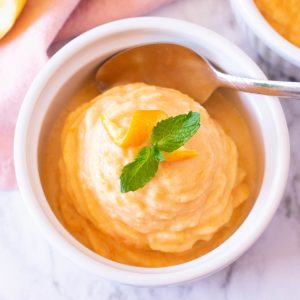 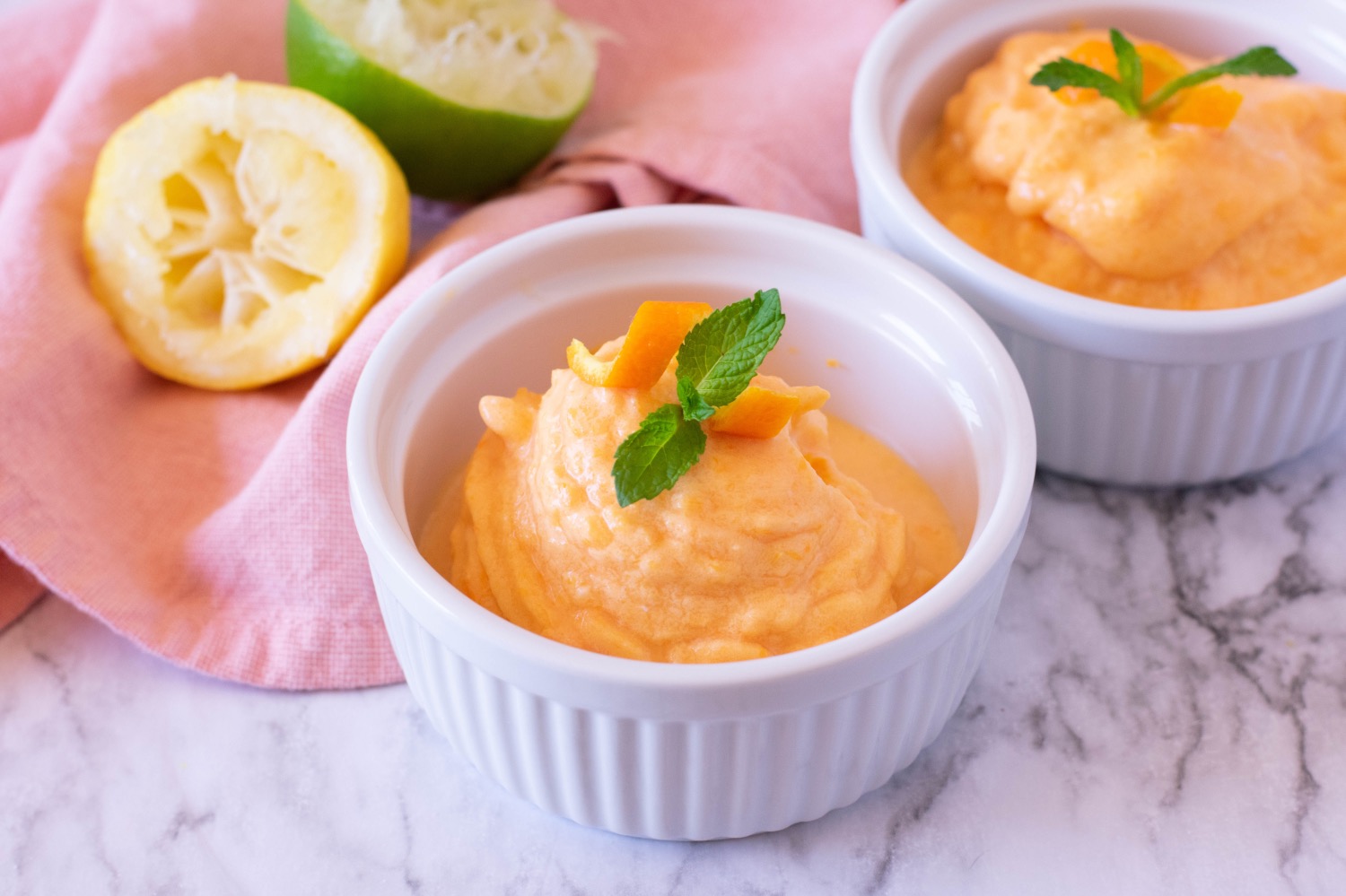 So how are you going to serve your Citrus Swirl? With mint and orange peel? Or will you create a float with orange juice or orange soda? Tell us in the comments! And if you need even more frozen treat recipes, check out even more recipes below!