Dawn Bell is a gal after my own heart, as we are both artists and creative in terms of fashion and vintage style.

Her career is vast, ranging from styling glamorous campaigns for Elaine Turner to spearheading Fashion Camp and Houston Vintage, both of which are gaining a following throughout the community. She also owns a warehouse/classroom/vintage treasure trove near The Heights, where photo shoots are conceptualized and inspiration is manifested. Its a place where you can book private shopping parties. Her vast collection spans from the 1920s to the 90s, and incorporating some newer pieces as well. I had the sincerest pleasure of visiting her famed ‘warehouse of vintage treasures’ to not only browse the racks of exceptional vintage garments (most are original, some are repurposed by Dawn), but also discuss her inspirations, career and of course- fashion. 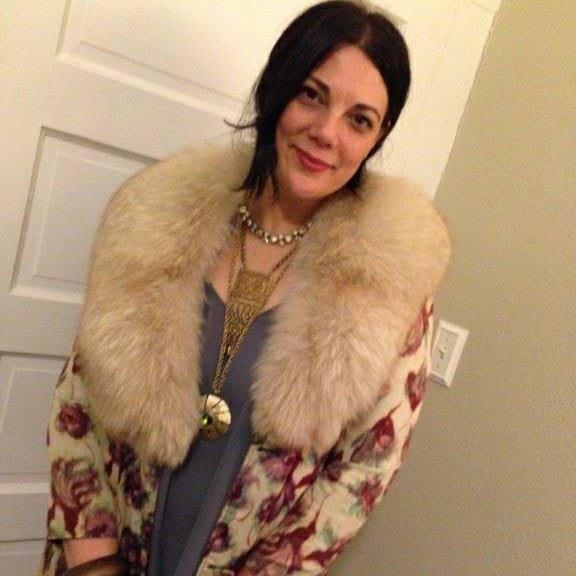 She credits her Mom, who gave her the most inspiration. “She was so glamorous… We didn’t have a lot of money, but she had a way of putting together clothes and finding things that no body else was wearing at the time and really making it into her own thing. She was one of these (in the 70s) a very glamorous…She wore turbans around the house and long caftans… I think in some sense she dreamed of being somewhere else her entire life. I have nine sisters and brothers, so we wore a lot of hand-me-downs. She did a lot of shopping in thrift stores, back then she called them “junk shops”.

None of the other kids would want to shop with her because they were all embarrassed to be in a thrift store. But I didn’t care, I was so happy just to have time with my Mom. I would always ask if I could go with her. I would pick up her knack for finding really cool things amongst the junk. I think we are also kindred souls and being connected in that way. Up until the day she died, she was close to 80, she came to visit me (I was planning a fashion show at the time) and I had all the clothes lined up along the wall and she was in bed. She would help me coordinate the whole show. If I had any questions as to the era a piece was from, she lived through all of them, so she knew. She educated me on all that too.”

“Being a young girl, I was always interested in fashion. Fashion magazines were an escape for me. My older sisters would get magazines and by the time I got them, they were beat up and looked at. Things were usually torn out and everything, but it became mine because I was the last one to read them. I would devour an issue from front to back for a whole month. I was learning things I didn’t know anything about or didn’t have a word for. I learned compositions- what makes up the picture. I learned a lot about archetypes.

When I got to be the age where I could go out, I could never find or afford clothes, so I started going to thrift stores. This was way before everyone was shopping for vintage. I found really cool , unique things and I put them together in my own style. I’d always got a lot of attention. People would compliment me or remark on how I put it together or how I wore it. So I got really comfortable with styling things. I would style all my friends for different things. It really wasn’t until I graduated high school when I started working for Saks. They hired me to model. So I was modeling for them, even though I wasn’t really interested in modeling. I walked in shows for Oscar de la Renta, Zandra Rhodes and Carolina Herrera while they were in town. I was more interested in how the show was going and all the behind-the-scenes stuff.  I just started volunteering in helping to put together the shows. After getting married and moved out of Louisiana (and became a Mom), I sort of forgot about fashion for awhile. But I was still collecting vintage. When I opened a shop, that’s when my first style job happened. It’s not that I pursued it, it just sort of came to me. It was just a natural progression that I do it and I enjoyed it so much. A situation came and I was forced to choose between the shop and doing style work, well there was just no question what I wanted to do. That’s also how I got to do style work for publications and companies.”

“I launched Fashion Camp in 2011. I originally put no thought into it at first because  I don’t spend a lot of time at the warehouse during the summer because of the heat. But one month, I had to stay in town because I was waiting to hear about a job. I contemplated what to do for the three weeks. I decided that I’d host a workshop for kids. I organized it in two week and spaces quickly filled up. The one session, I had about 30 kids. The concept was to help the kids understand the fashion industry as a business and also have a lot of hands-on, fun experiences. So they get to go to a designer’s studio, and understand the whole process of designing from inspiration to production to actual retail display. They get to have one-on-one with the designers who are making it in the industry. I do style workshops with them. They get to meet a lot of people in the industry because I’m able to get guest speakers to come in and speak to them. We do field trips and also do a hands-on project in the week.

One client, Elaine Turner donated a lot of leather last year. We actually came together as a group and the kids worked in ‘design teams’ to put together boards, decide on their target customers, and make a collection. I enlisted the help of Jessica McMahon, an instructor at HCC and Glassell School of Art, to assist them in making handbags. They then got to present them to the team at Elaine Turner, who gave the kids real-world critiques. This year, they are going to get to visit David Peck and make garments in teams. They also get to meet other kids that are interested in the same things like fashion and style. ”

“Houston Vintage is my baby…It was born out of a desire to bring the community together. I was doing vintage, I had a shop, and I was starting to meet other shop owners. At the time, there weren’t any pop-up shops and so this was a great time to start something fresh. Like let’s all come together and do a big festival! I had seen and been to some in the UK . In London, there’s a big group of ‘retrophiles’ that meet and love vintage and that lifestyle and they celebrate it. So that’s what I wanted to do. I wanted to have that here. I wanted everybody that loves it to get together and enjoy it, while at the same time support all these small local businesses that are trying to make it. One of the things that I love about vintage is that it’s so green…if you have the right practice. If you practice it in the right way , you are saving the environment from a lot of waste. So we are really trying to promote that as part of the festival too. We are going on our 6th year (this year). We found our home at the Air Terminal Museum. We’re happy to be in such an architecturally unique space and we’re happy to incorporate a lot of new things every year. It’s grown quite a bit and we hope it’ll continue to evolve and grow. This year, we rented out the hangar and we took on another partner so we are going to expand by 60% . We are going to have a ton of vendors this year , so I’m really looking forward to it.”

“I would love to have the people of Houston to go out and try something new. Don’t be afraid to experiment and pull yourself away from your usual crowd and try something new. It doesn’t mean that you have to change who you are. Just experience something new, especially in fashion. I feel like people make safe choices when it comes to fashion. If you can dress to please your soul, you’ll be so happy. So many people dress in clothes that become such a uniform. When you’ve reached that point in your life where clothes just become like a uniform to fit in then there’s no love, no fun, no play in that…Dress to feel good …. “