Bourbon has such a buttery and rich flavor. It pairs so well with with fruit like this or citrus too. Imagine the flavors of an old fashioned, citrus and whiskey, one of the most popular whiskey drinks. It’s also perfect when its kept simple like a bourbon and soda or bourbon and coke. I created this Vanilla Bean Infused Bourbon Recipe because it can pair so well in these cocktails and more!

This Vanilla Bean Infused Bourbon can make a fresh and light Vanilla Old Fashioned or a Vanilla Bean Whiskey and Coke. The possibilities are endless. Alcohol infusions are so easy to make, that you will wonder why you haven’t been always making them! For this recipe, we used Maker’s Mark but you could use any kind of bourbon you like. I recommend bourbon over scotch. But this is your dream! Do what you like. Bourbon just happens to have a smokey flavor that pairs so well with vanilla. It’s also more commonly used in cocktails whereas Scotch is mainly sipping. For the vanilla, I used Penzey’s because it’s the best. I prefer Mexican Vanilla to Madagascar because Mexican is pollinated naturally. It also happens to be closer to me regionally because I’m from Texas y’all. It’s best to start with the measurements I suggest here. Then when you have tried the traditional version you could adapt the amount. And voila it’s just that simple! The only tricky parts are waiting two weeks for it to steep and gather all that gorgeous vanilla flavor. The good news – you can still sip it and taste it as it brews! You can taste your spirits along the way to see if the vanilla essence is strong enough (it gets stronger over time). And the amount of vanilla you add directly relates to how quickly the vanilla flavor becomes pronounced. 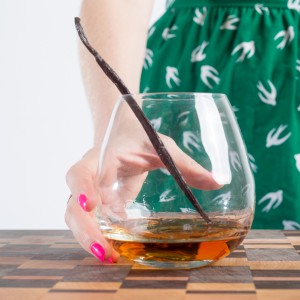 Brittany Bly
Bourbon has such a buttery and rich flavor. It pairs so well with with citrus – like an old fashioned. It’s also perfect when it’s simple like a bourbon and soda or bourbon and coke. We created this Vanilla Bean Infused Bourbon recipe because it works with both!
Print Recipe Pin Recipe
Prep Time 5 mins
Cook Time 25 mins
Total Time 25 mins
Course beverages
Servings 1 Bottle Need more recipes with alcohol in your life? How about these recipes below!