I’ve been on a s’mores kick over here – so far we’ve eaten actual s’mores, s’more cupcakes, frozen s’mores hot chocolate, and Costco has an amazing s’mores snack mix that I can’t stop eating.

Next up? This Fluffy S’mores Cheesecake Dip. it’s so easy, and with just a handful of ingredients and 5 minutes of your time, you’ll be indulging in all your favorite campfire flavors. You’ll want to add these to your grocery list:

To Make the S’mores Cheesecake Dip

Melt the bar of baking chocolate in the microwave or on the stove.

Let your packages of cream cheese come to room temperature.

In the bowl of a stand mixer, beat together the cream cheese, powdered sugar and chocolate. Spread the mixture in an 8 inch round  or rectangular dish. Wipe mixing bowl out. Then mix together marshmallow cream and the 2nd package of cream cheese. Crush the Golden Grahams cereal and sprinkle over the top of the chocolate cheesecake layer in the baking dish. Set the oven to broil at 500 degrees. When the oven is preheated, place the dip in the oven for just a few minutes, until the top of the marshmallows is toasty and golden. Serve the s’mores cheesecake dip immediately. The first option is pretty obvious: graham crackers, broken into quarters. I do not recommend name-brand (that brand that starts with an H…) because they are suuuuuper brittle. The graham crackers don’t break along the seams into quarters, and when you try to dip them in anything, they just fall apart. I highly recommend the store brand or gluten-free graham-style crackers, because they are much heartier and stronger.

But there are myriad other dippable foods you could serve alongside this dip:

My cream cheese isn’t room temperature. Can I microwave it?

The reason you want it room temperature is so that it will mix smoothly into your chocolate and become a creamy base layer for your dip. If you forget to get your cream cheese out ahead of time – and let’s face it, I’m more than likely going to forget – I don’t recommend microwaving it. You can, and I’ve done it in a pinch, but you risk it getting too melted and ruining the texture. Refrigerate any leftover s’mores dip in an airtight container for up to three days. The jumbo marshmallows on top may get gummy or soft and squishy when they’re refrigerated, so you have a couple of options:

You can just scrape off the jumbo marshmallows and toss them before storing. The leftovers will still taste delicious without them.

Alternatively, you can just eat the dip with the leftover marshmallows if the texture doesn’t bother you.

Can I Make the S’mores Dip Ahead of Time?

Listen, I am all about prepping ahead of time, especially if you’re making the dip for a gathering. You can make the chocolate cheesecake and marshmallow fluff layers ahead of time, up to 24 hours before. Then, on the day of serving, add the marshmallows and heat under the broiler to toast them. 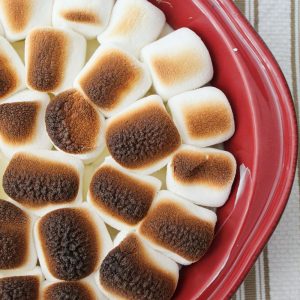 Hi, I'm Lisa, and I run the blog Biscuits & Grading. I love creating easy family friendly recipes, making handcrafted cards, and exploring life through the eyes of my 16 month old son. Every day feels like a new experience, and for better or worse, I love it.