For holidays like the 4th of July and Memorial Day, it’s almost a requirement to make super cute red, white and blue food. But if you are like me, holiday planning takes a long time!

Some years, I have the energy and time to make more detailed desserts like these 4th of July Macarons. But sometimes I just want to make something fast and easy like these adorable Red, White, and Blue Cocktail Shooters.

These Mini American Flag Pies are easy enough to bring to a pot luck and pretty enough for any 4th of July party. They’re perfect! So let’s make them. To make these pies, you will need a few different tools:

Of course this is a baked pie, so you will be using an oven too! The ingredients are so simple! That’s one of the things I love about this recipe. Start by Making the Pie Crust

Gently sprinkle a flat and clean surface with flour. Then place your chilled but not frozen pie crust on the floured surface. Because you are making mini pies, refrigerated dough that’s not shaped into a pie is easiest.

Sprinkle your rolling pin with a touch of flour and roll the dough just to flatten it evenly. To make the bottom half of the pie crust, punch the dough with a circle cookie cutter. There may be slight variations based on what type of cupcake tin you are using, but a 3 or 4 inch round cookie cutter will be the perfect size.

If the dough sticks to your cookie cutter, dip it in flour first before cutting the dough. Spray your cupcake pan with non-stick spray, and place your cut circles of pie dough inside. That’s okay. To add to your dough, use water to help press the pieces together and smooth away any edges. Next, fill the pie shells with red and blue filling like cherry and blueberry pie filling. Fill the cups to almost the brim. The fruit will boil and bubble in the oven if they are overfilled but you definitely want these pies to feel full.

If you like an extra crispy bottom crust, you could actually pre-bake the bottom of the pie shell before adding the fruit for 5-10 minutes. Cut out Stars for the Top of the Pie

With any excess dough, you can form it into a ball and then roll it back out. You will want your dough an even thickness and the same thickness that you started with. Coat the Star in Egg Wash

For a gorgeous golden brown pie crust, make an egg wash with 1 egg and a tablespoon of water. Mix the two together to whip the egg and use a basting brush to brush it over the surface of the star. Want detailed instructions on how to make egg wash? Find the full Egg Wash Recipe here. Once your mini pies are topped with stars, and coated with egg wash, it’s time to bake them!

I recommend using the middle rack to prevent the top from browning too much. If the stars become too golden while they are baking, just cover the pies with a sheet of aluminum foil! That way you can keep the pie baking but prevent any browning to the crust. Once you pull your pies out of the oven, allow them to cool until they are safe to eat – around 10 minutes. Since these pies are so adorable, they have to be made center stage of any 4th of July or Memorial Day celebration – so place them on a serving tray or on a cupcake stand.

They can be served as is, or even better with a scoop of vanilla ice cream. And you can warm the pies again in the microwave when you are ready to serve them. To store the pies, keep them in an air tight container in the fridge for up to a few days, maybe even a week if you are lucky!

You can also freeze already baked pies for up to 6 months – but these pies are best in the fridge and eaten quickly! 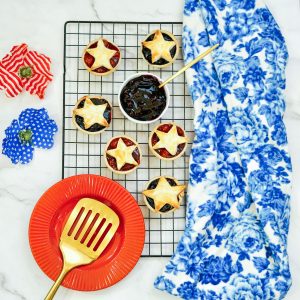 Ready for your 4th of July party? I bet you are now that you have these super cute Mini American Flag Pies! If you want even more Patriotic inspiration, check out the links below.